At this great slot from NetEnt, you’ll get to visit the lost world of Shangri La, perched high in the foothills of the Himalayas. When there, you’ll be accompanied by an intrepid adventurer, and you’ll get to see such wondrous things as white tigers and stunning monasteries. If you’re really lucky, you might even manage to find this slot’s huge jackpot, which can be worth thousands and thousands of pounds! Even if you don’t win the jackpot though, you should still love spinning the reels of this fantastic looking slot from NetEnt – a company renowned for creating some of the greatest slots of all time!

Shangri La is a slot with five reels and 15 different paylines. You might think that this is a small number of paylines, and you would be right, however don’t worry: there’s still loads of action at this slot, thanks to the seven different bonus features, all of which are described further down this page. The paylines at this slot are fixed, however you can change the bet amount before each spin. The minimum bet per spin is £0.20, while the maximum bet per payline is an impressive £200!

The prizes at this slot are pretty impressive, but what else would you expect from a slot created by NetEnt? As already mentioned, the highest paying symbol is the scatter symbol, and this is worth a massive 3,000x your bet. What’s more, spinning in five scatters will also see a bonus feature starting, therefore you should win even more money!

Bonus features are many people’s main reason for playing a slot, and you’ll find loads of them when you play Shangri La. The wild symbol at this slot is represented by the adventurer, and this symbol can appear on reels two, three and four. What’s more, the Added Wilds Feature could happen randomly, and this sees additional wild symbols added to the reels. There’s also the random Wild Reels Feature, and when this activates, you’ll find at least one reel turning completely wild.

There’s also the Added Scatter Feature at this slot, and this sees extra scatters added to the reels completely randomly. This doesn’t just help you to win money in the base game though – it can also help you to activate one of the bonus features. There are four main bonus features at this slot, and they all can be activated when you get three or more scatter symbols on the reels.

The first of the bonuses you could receive is free spins. This will see you awarded eight free spins in total, however they aren’t standard free spins. Instead, you’ll find special wild symbols on the reels, and these have a higher chance of spinning into view when compared to the standard wild symbols at this online slot.

The next bonus is called the Chest Bonus, and this is a pretty simple bonus round! You’ll need to keep on opening chests and winning money as you do, and the game stops when you’ve won all the prizes, or when you spring a trap. The most that can be won during this bonus is 15x your bet. The fact that you can only win 15x your bet during this feature probably makes it the worst of the four different features on offer.

The final bonus you can activate when you spin in three scatter symbols is the Trail Bonus, and this is probably the most enjoyable of all the bonus features. You’ll see a map of prizes on the screen, and you’ll need to spin the wheel to see how far you move. You’ll keep moving and collecting prizes until you spin in an X on the wheel. The most you can win when you activate this feature is 100x your bet.

The bonus you receive when you get three or more scatters on the reels is completely random, and is determined by a spin of a wheel. Manage to get the Trail Bonus or the Super Free Games and you could find yourself winning a massive amount of cash!

Shangri La is thought to be a paradise, and fans of online slots should certainly be in paradise when they play this innovative and exciting game from NetEnt. Like all good online casino games, Shangri La offers some really big prizes, including an impressive jackpot, plus it also has a great theme. The bonus features are the biggest selling point of this game though, as there aren’t many other slots out there that can offer as many bonuses as Shangri La manages to. So, if you’re looking for a really exciting online slot to play, Shangri La could well be the perfect choice!

After playing the Shangri la slot, you may also like to try the Asian Attraction slot too. 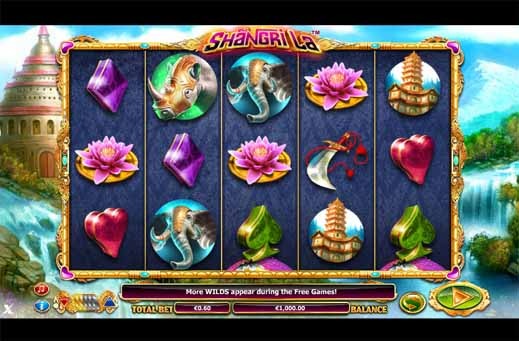 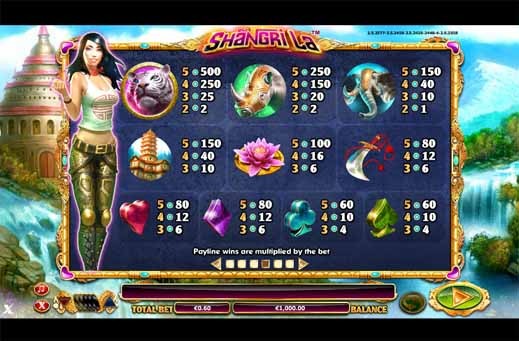