Microgaming have released quite a few new online slots in 2017, and the latest name added to their portfolio of games is Six Acrobats. This is a slot with a Chinese theme – which is the case for many new online slots nowadays, thanks to the burgeoning popularity of online gambling in China – and it also offers you the chance to win some fantastic prizes, including a jackpot worth 4,333x your stake. As with nearly all Microgaming titles, this is a game that offers pretty much everything a player could possibly want, so keep on reading to find out everything you need to know about the Six Acrobats online slot.

When Six Acrobats loads, you’ll see fantastic graphics straightaway. The symbols are all really exciting (aside from the 9-A symbols, which are slightly boring and could have been designed better), plus the backdrop to the game really helps to create a great atmosphere. The button layout is also really intuitive, giving you all the options you need, without detracting from the overall look and feel of the game. Microgaming really do know how to design online slots, and this is clearly evident at this new title in their repertoire.

Six Acrobats is a slot with five reels and nine fixed paylines. Nine paylines is a relatively small number, especially when compared to the other games being released by software companies at the moment. Don’t worry though, as Microgaming have still ensured that there’s plenty of excitement at this game, despite the lack of many paylines. Because the paylines are fixed, you can’t change the number you play, but would you really want to reduce the number of paylines anyway?

You might well want to alter the amount you bet per spin though, and it’s really easy to do this at Six Acrobats. To do so, just alter the “Bet Amount” tab underneath the reels. The least that can be bet at this slot is £0.09, while the maximum possible bet is £22. This makes Six Acrobats a slot more suited to lower stakes players. When selecting how much to bet, remember that higher bets lead to higher potential prizes. Also remember that you should always bet within your means though.

The last thing to look at in this section is the prizes. After all, aren’t these the main reason why people play slots online? At Six Acrobats, the most you can win on a spin is 4,333x your stake, and this is only possible during the free spins, thanks to the massive multipliers found in this bonus feature. The unique symbols are the highest paying symbols at this slot while, as normal, the lowest paying symbols are the 9-A symbols. Keep an eye out for the wild symbol too, as this can lead to some massive prizes – as you’ll see in the next section.

Most new Microgaming slots come with a whole host of different features, however this isn’t the case at Six Acrobats. Instead, there are only two different special symbols to watch out for. Don’t worry too much though, as both of these symbols can lead to some absolutely huge prizes, as well as loads of entertainment.

The first symbol to look out for is the wild symbol – a symbol found at the vast majority of online slots nowadays. This symbol is represented on the reels by the Six Acrobats logo, and it can substitute for all other symbols on the reels, aside from the scatter symbol. This symbol doesn’t just help you to make winning combinations though – it also increases the amount of money you win. Why? Well, every time a wild symbol is used to create a winning combination, you’ll find that you receive a 5x multiplier. Some other slots add multipliers to wild symbols, but there aren’t many that offer a multiplier of this size to players!

The free spins can lead to some absolutely massive prizes, making this one of the best free spins bonus rounds found at online slots. Every single winning combination that spins into view will receive a 5x multiplier, but this isn’t the best part of this feature. The best part comes when you manage to get a winning combination featuring a wild symbol. When this happens, you’ll have a massive 25x multiplier added to your prize! It goes without saying that this multiplier can lead to some staggeringly large prizes being awarded.

Six Acrobats manages to do a really good trick, as it seamlessly balances fantastic graphics, huge prizes and some really enjoyable gameplay. Microgaming have made a name for themselves by producing some of the best online slots around, and this is exactly what they’ve done when it comes to this new slot. It’s also really nice to see that they’ve used a new theme, and haven’t followed the well-trodden path of more commonly used themes, plus they’ve also paid attention to the base game, refusing to make the bonus features the overwhelming attraction of the game. So, if you’re looking for an exciting new slot to play online, Six Acrobats could be a great choice for you! 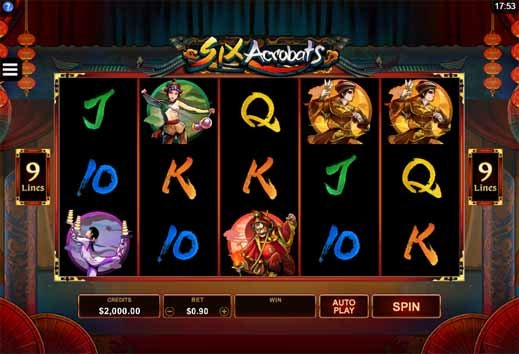 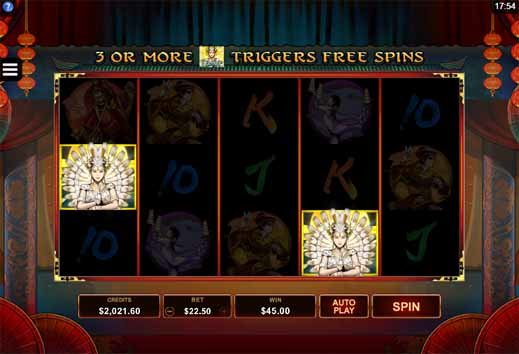