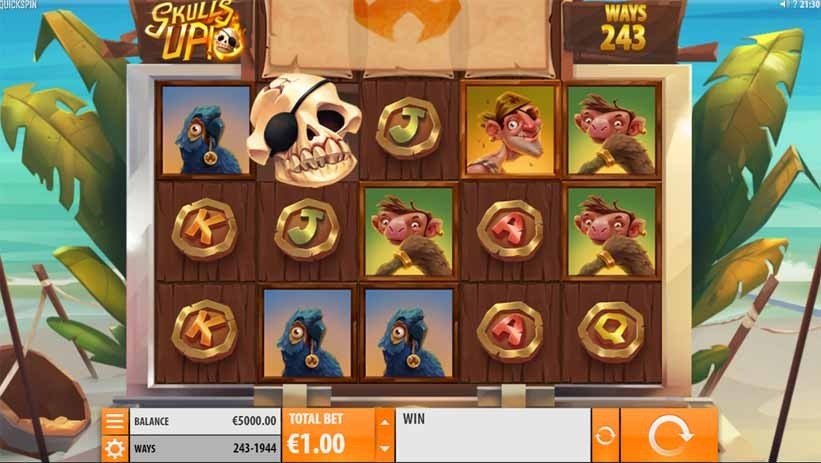 Skulls Up is not a typical pirate themed online slot. It looks different from others that use the same theme, much of which is because of the unusual layout of the reels. With five reels and three rows, the game easily fits onto smaller screens.

The graphics in the game were designed cartoon style. The background behind the reels features a beach with refreshingly bluish green water and palm leaves on both sides of the reels. Players can see a beach chair to the left of the reels, shaped like a hollowed out coconut.

The pirate themed symbols on the reels include a female pirate captain, a male pirate with the requisite patch over his eye, as well as parrots and monkeys. A skull serves as the wild symbol while a treasure chest is the scatter symbol. There is also a grid above the reels that is used for the re-spin bonus.

While a standard skull is the wild symbol, the game also has a flaming wild skull. Anytime this one lands on the reels players get Flaming Respins. Before the re-spin bonus begins, the grid above gets regular and flaming wilds. At this time, the reels expand, so players have even more chances to win money. When the maximum number of reels are on the game screen, wilds become locked.

Throughout the course of this re-spin bonus anytime a flaming wild skull contributes to a winning combination, the flame is put out. This means that the flaming skull is now just the regular skull symbol. The re-spins bonus is over when all of the flames have been put out. The extra reels are then removed from the screen and regular gameplay resumes.

If players get three of the treasure chest scatter symbol on the reels at once, they get eight spins for free. The free spins are played the same way the respins are. However, there are two extra features added to the free spins feature. This time, if the expanded reels can’t expand any more, players get an additional two spins for free. The flaming respin may even be triggered during this bonus. The end of the flaming spins does not eliminate the extra reels from the screen.