If you’re a fan of nature, and elephants in particular, then you’re going to love this slot from Betsoft. Stampede will take you to the heart of sun-drenched Africa to embark on an unforgettable adventure that will see you interact with hundreds of wild animals – but remember that this is their home and they could go berserk at any moment if you put a foot wrong. If this sounds a bit dangerous for you, don’t worry, this frantic way of moving is exactly what the creators had in mind when they wanted to make a slot that was captivating and entertaining – and they’ve pulled it off marvellously. With a free games feature that comes with multiplier wins, your next biggest win is just around the corner. So take a read of our review today and make sure you’re ready to visit Africa!

Featuring glorious graphics and an intricate design, Betsoft have done a wonderful job in creating a slot that captivates Africa’s beauty immediately. All your favourite animals are brought to life as you load the game and a sprawling savannah makes up the backdrop to the reels. Symbols that will go some way in winning you big prizes include eagles, leopards, giraffes, gazelles, and giraffes, and even though many software developers have made similar looking games like this in the past, it seems that visually, Stampede is the best one yet.

In total there are 5 reels and an amazing 1,024 paylines on this slot which cannot be altered. This is way more than the average slot will offer players butit definitely makes for more entertainment as there are many different prizes which will keep you occupied. Betsoft’s decision to make these paylines fixed is similar with many other software providers these days as they realise that gamers aren’t so silly to reduce them and therefore damage their chances of winning.

Upon testing the game we found out that you can bet as little as 25p or as much as £50 per spin. This is perfect for the casual gamers who won’t find it hard to cough up the minimum required but the high-rollers may feel a little hard done by. There are decent betting features that can be taken advantage of to make your gaming a little easier such as the Autoplay and the Max Bet option.

There may be 1,024 different ways of winning but how does it actually work? Well, the aim is to match identical symbols from left to right and the most lucrative symbol you need to look out for is the elephant because finding 5 of these on a single line will win you 300 coins. Another decent paying symbols is the lion which will get you 240 coins for matching 5 on a payline. However, the biggest wins will come from the bonus features which we will discuss now.

Stampede may not be blessed with loads of features but it’s still best to discuss the ones that are available because these will give you plenty of entertainment and chances of big cash prizes. Some gamers will prefer the fact that there are not too many features because sometimes it can act as a distraction from the base game.

Fans of slots will be well aware that there are Wild and Scatter symbols that need to be looked out for in the base game because it triggers exciting features. In Stampede, the Wild symbol cannot be missed because it has Wild written on it and these act as substitutes for any other symbol in order to create a winning combination wherever possible. Meanwhile, the Scatter symbol takes the form of the tree symbol and if you find 3 or more of these on the reels, you will activate the Free Spins feature.

Depending on how many Scatters you found to activate the Free Spins feature you will be rewarded with 8, 12 or 20 free spins. The Wild will always come with a 2x or 3x multiplier and these are cumulative as well since they appear in the middle 3 reels. It’s possible to retrigger this bonus round and collect even more free spins and it’s possible to win as much as 27x your normal payout if you match up three of the 3x symbols.

One final important part of this game is the gamble feature and this can be utilised after every win. It is called the Double Up game and you will be given a coin in which you have to guess heads or tails in order to increase your winnings by 2x or risk losing it all. As long as you keep guessing correctly, you can play this game as many times as you want. Just try not to get too greedy.

There may not be too many unique features on Stampede and it isn’t a revolutionary new genre that we’re talking about, but what Betsoft have managed to do is create a simple, entertaining game that’s very impressive in terms of graphics. It’s still a great slot that deserves plenty of attention, especially if you’re a fan of Africa and its marvellous animals. 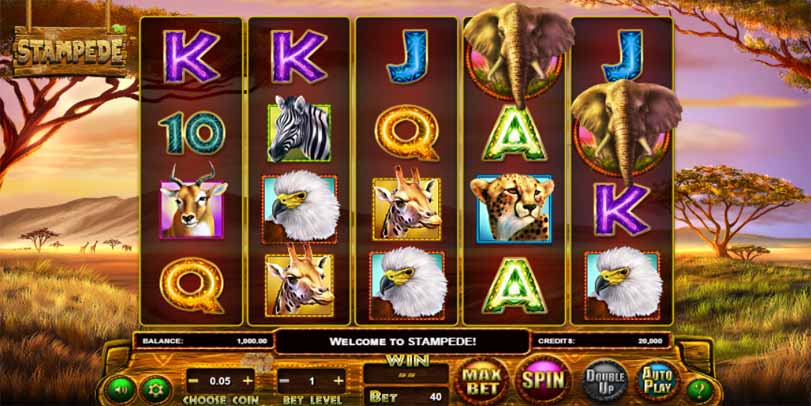 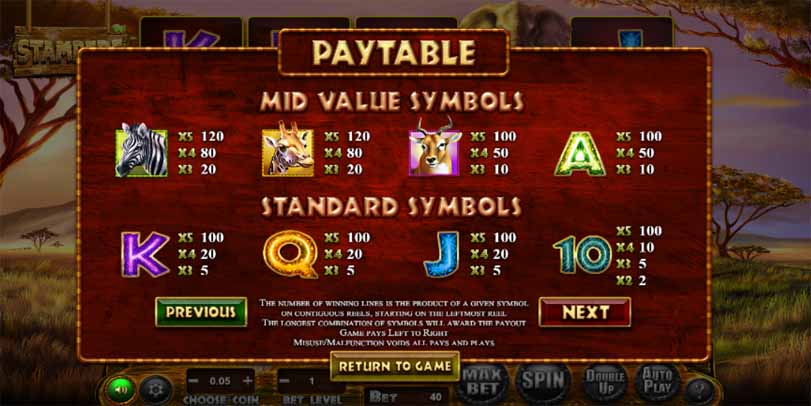