Finally, a slot celebrating the glory of Subbuteo is here, and if you used to spend your afternoons flicking plastic players around the football pitch, this is the perfect online slot for you. With great graphics, some big prizes and some really exciting bonus features, this slot really does offer everything an online slots fan could possibly want. So, why not take a look through this Subbuteo online slot machine review and see why you should be playing this game?

Subbuteo is a slot with five reels and three rows. It doesn’t look the same as other slots though, as the reels are actually quite small, only filling some of the screen. This is because your Subbuteo team is shown prominently below the reels, but more about them later in this Subbuteo slot review. There are 20 different paylines spread over the reels, and these paylines are fixed. This means that all 20 have to be active on every spin of the reels. This isn’t the most paylines we’ve seen by a long shot, however 20 paylines is still enough to ensure that excitement comes around very often.

But how much cash can you bet on each spin of the reels when you play the Subbuteo online slot machine? Well, the minimum possible bet is just £0.20, which should be low enough for even the lowest stakes players. The maximum bet is £200, which should keep the high stakes players happy. To adjust the amount of money you bet per spin, just click on the up and down arrows to either side of the spin button. The more you bet, the more money you can potentially win.

Perhaps the most important thing to look at in this section is the prizes though, so exactly how much could you win playing the Subbuteo slot? Well, the biggest possible prize during the base game is worth 5,000x your bet, and this happens when you get five wild symbols on a payline and the Super Sub feature is active. You’ll probably find your biggest wins coming during the main bonus feature of this slot though, and you can find out all about this in the next section…

So, what are the bonus features like at this online slot machine? Well, they’re actually really good, and there are quite a few of them! The first to mention is the wild symbol though, which is really easy to pick out. This can substitute for most other symbols on the reels, and this means that it can be really helpful when you’re trying to create nice winning combinations. It’s also the jackpot symbol, meaning you’ll want to see it spinning in on the reels even more!

Before we look at the other features, it’s probably a good idea to explain what the players under the reels are. You’ll notice that you receive an extra player every time a symbol with your team’s logo spins into view. You will then find that the main bonus feature activates when you have eleven players. You can also pay to start the feature when you have seven players in your squad.

When you do activate the main bonus, you’ll receive 18 free spins. Each one represents 5 minutes of action on the football field. During the free spins, a Subbuteo match plays out in front of you, and every spin can bring a bonus feature. There are loads of these, and they are:

• Substitution: The Super Sub symbol appears and substitutes for a low value symbol.
• Red Card: One of the lower value symbols is removed from the reels.
• Action Replay: The reels go in reverse, often causing you to win the same prize again.
• Goal: If your team scores, you’ll win a prize worth 5x your bet.
• Penalty: If you score a penalty, you’ll win a cash prize.
• Free Kick: This leads to you getting a free respin of the reels.

Once the Subbuteo match has finished, you’ll see if you’ve won, and if that’s the case, you’ll receive a bonus prize. If the scores are level, it’ll go into extra time, meaning you get six more free spins. If the teams still can’t be separated, the match will go into penalties, and you’ll win a prize worth 5x your bet for every successful spot kick.

You’ll also find that there are three random features that can activate during the base game. The first of these is the Extra Player feature, and this adds one player to your team, plus you’ll also win a cash prize. Then there’s the New Contract Feature, which sees you simply getting a cash prize. Finally, there’s the Manager of the Month feature, which can have four different outcomes: you could get one extra player, you could fill your whole team up, you could win a cash prize, or you could get a respin with a guaranteed win.

Subbuteo is an absolutely fantastic online slot machine, with a whole host of exciting bonus features, and some massive prizes on offer as well. Even those who have never played the table-top game will appreciate this slot machine, which is why we’d recommend it to absolutely everyone. So, if you’re looking to play an exciting online slot today, why not spin the reels of NextGen Gaming’s fantastic Subbuteo slot. 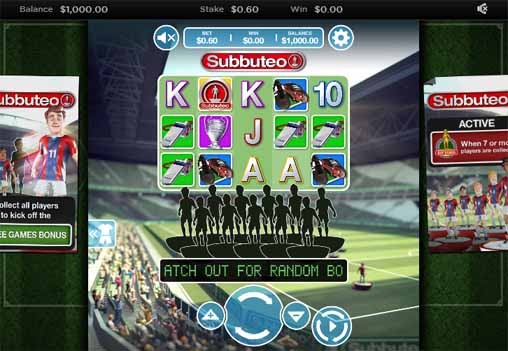 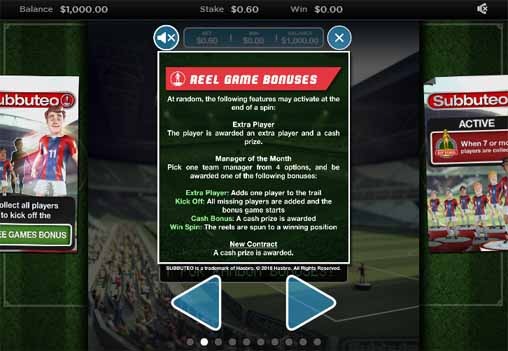