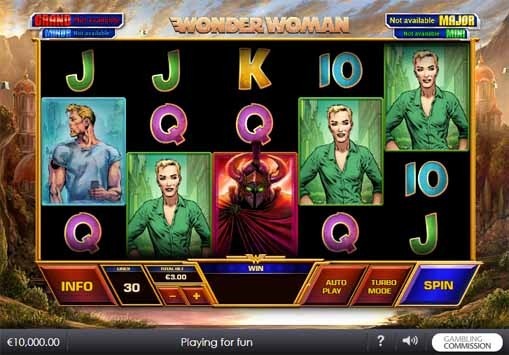 Though Playtech isn’t the first software company to release a Wonder Woman themed game, it may be the first to get it right. Playtech already had experience with DC comic based slots such as Justice League. The trend continues with this title that pays tribute to the character Linda Carter brought to the screen.

Since Wonder Woman is a comic book character, the game is laid out like a comic book would be. When the reels spin, the turn of pages accompanies the action. And the reels are filled with the main characters fans have come to know and love. These characters, in addition to the star herself, are Barbara, Cheetah, Aries and Steve. The scatter symbol is represented by the Cheetah vs Wonder Woman and appears on the first and fifth reels. Both appear in the symbol, something players don’t see in most other slots. A burning Wonder Woman logo serves as the game’s wild symbol.

When Wonder Woman and Cheetah appear on the first and fifth reels at the same time, free spins are won. There are three ways in which free spins may be offered. Those three ways are Wonder Woman, Cheetah and Fire free spins. During Wonder Woman free spins one of the symbols becomes stacked. The possible symbols that could be chosen are Aries, Steve and Diana, as well as 10, A or Q.

During Cheetah free spins if a high paying symbol appears in a winning combination it becomes the Cheetah. The symbol remains this way until free spins have commenced. Upon a win on the “last” free spin, players get one more spin of the reels for free.

During Fire Wild free spins the wild symbol occupies the three reels in the centre of the game screen. If players get anywhere from one to three fire wilds on the reels, the corresponding number of relevant symbols become wilds too.

Aside from these bonuses, players may win one of the game’s jackpots. Anytime the reels are spun, players could win big. The jackpot feature is randomly triggered and awards one of four progressives. If a player triggers the jackpot feature they see a new game screen. It is filled with 20 icons representing jackpots. Players must then match up a jackpot prize with the corresponding hexagon. If a player fails to do so, the game will randomly choose the match ups for them. 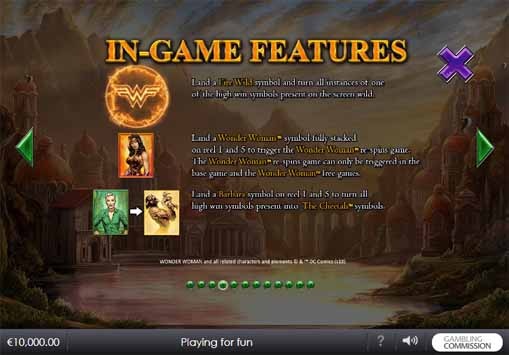 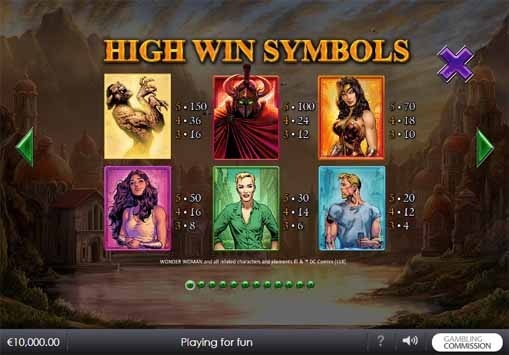 With four possible jackpots, players find it difficult to resist Wonder Woman. This slot is attracting players that don’t even read comic books. Its simplicity makes it a game that can help anyone unwind after a long day. Playtech knows what they are doing when it comes to releasing new titles. Players can expect much more from this software provider, and if you enjoyed laying this game you might also like the Justice League slot too.