There are some online slots that go all in for bonus features, offering massive numbers of them to eager players. These are generally well received by the online slots world, as they’re seen as pushing forward the game’s evolution, thanks to the innovative gameplay. It’s important not to forget about the more basic slots though – the slots with just three reels and barely any special features to mention. Sweet 27, the new online slot from Play’n Go, definitely falls into this latter category. Just because it’s simple, it doesn’t mean it isn’t great fun to play though, as you’ll find out when you read through this Sweet 27 slot review.

As the name suggests, this slot is based on some sweet treats, making it perfect for long hot summer days. You won’t feel too guilty about eating these treats though, as you won’t find sweets on the reels – instead, you’ll find scrumptious looking fruit (although the added cream might not be too good for your waistline). The symbols are displayed against a backdrop of rolling fields, with candy canes and lollipops sprouting from the ground.

As previously mentioned, Sweet 27 is a slot with just three reels – two less than at most online slots. There are 27 paylines spread across these reels – hence the name of the game – and this essentially means you just need to get matching symbols on consecutive reels, starting from the first reel. It is not possible to alter the number of paylines you play at this slot, but most people wouldn’t want to reduce the number anyway, as more paylines means more chances of spinning in a winning combination!

It is possible to change the amount you bet at this slot though, and doing so really couldn’t be any easier. Just click on the amount you want to bet using the icons beneath the reels. The lowest possible bet at this slot is £0.10, while the highest possible bet is £100. Therefore, this slot is great for players of all levels, from low stakes players through to high stakes players. When choosing how much to bet, you should always remember that bigger bets will lead to bigger potential prizes. Of course, you should also ensure you play within your means though.

But what about the prizes at this slot? Well, the maximum prize is won when you manage to get the free spins bonus – more about this later – and you spin in wild symbols on all the positions when there is a 3x multiplier. Doing so will lead to you winning a massive 1,758x your bet which, when playing at the highest stakes, is worth an impressive £175,800. During the base game, the highest paying symbols are the seven and the BAR, while the lowest paying symbols are the oranges and the cherries.

Those preparing to play this game should take into account the fact that it is an incredibly volatile slot. But what does this mean? Well, it means that wins don’t come that often, but big wins are likely to come to those who wait. So, you could win a lot of money quickly when you play, however you could also find yourself losing a fair amount of money too.

As already mentioned, there aren’t that many bonus features at this online slot, which is part of the appeal of the game. There is a wild symbol though, and this only appears on the third reel. When it spins into view, it can substitute for all other symbols, and help you to create some nice winning combinations. The wild symbol also starts the main bonus feature at this slot, as you’ll see below.

When you spin in a wild symbol on the third reel, you’ll initiate the Rolling Wild Free Spins feature. You’ll receive two free spins at first, and the wild symbol will roll one reel to the left on each spin, ensuring that you have a better chance of winning than you do on a standard spin. If you manage to spin in another wild symbol on the third reel, you’ll replenish the number of free spins back to two, plus you’ll find the multiplier increasing. If you’re lucky, it’s possible to get a total of 20 free spins when you activate this feature.

There is also a Gamble feature at this slot – something that is commonly found at online slots, but not seen as often at simpler three reel slots. You’ll have the option to use this feature after any win during the base game, and it will give you the chance to double or quadruple your prize. What’s more, it is possible to gamble up to five times. To double your prize, simply guess the colour of the next card, and to quadruple your winnings, correctly guess the next card’s suit. Remember though: if you guess incorrectly, you will lose everything you’ve just managed to win. Most experienced players will choose to avoid this feature.

Sweet 27 is a simple slot, but one that has been created extremely well by the people over at Play’n Go. The inclusion of a great bonus round ensures that this slot isn’t too basic though, and it’s this bonus round that can lead to the biggest prizes. This is an online slot that most casino players should really enjoy playing, so why not start spinning the reels at Sweet 27 today? 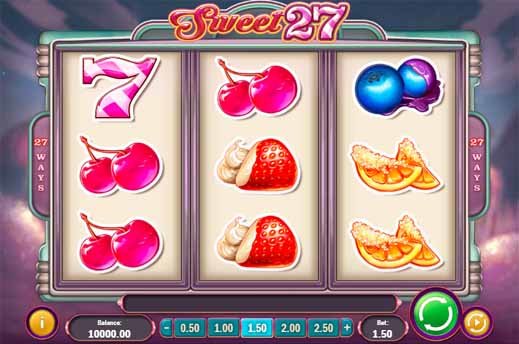 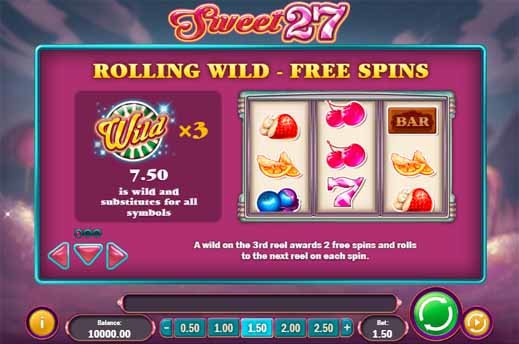