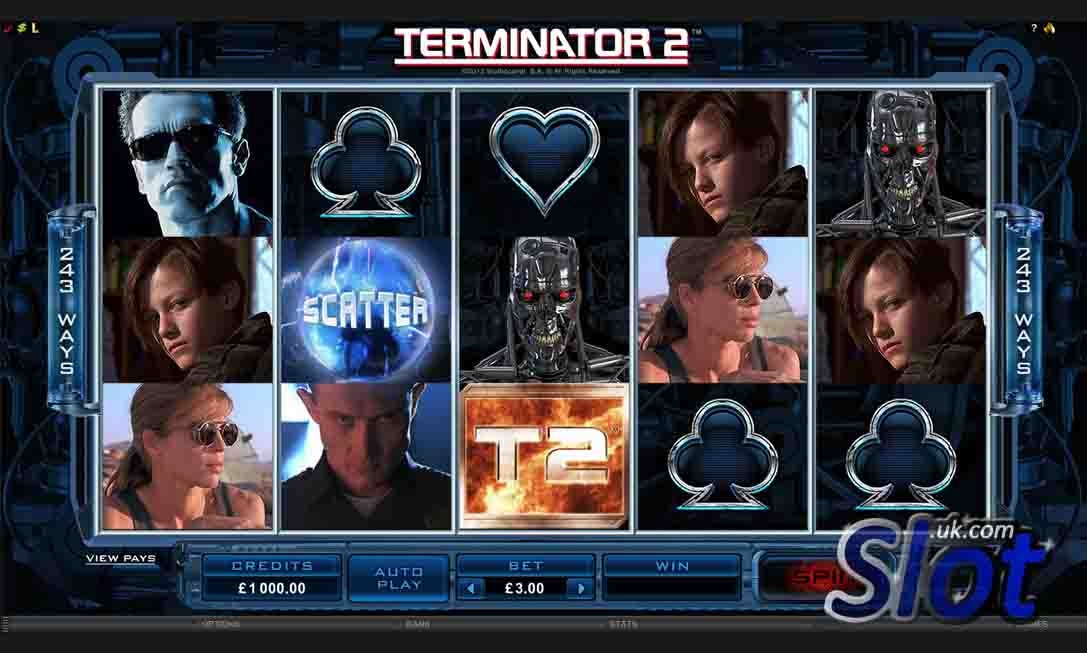 Terminator 2 Slot Game arrives with a bang (and a few gunshots) from Microgaming this summer. Evryone’s favourite hybrid male is back on screen, but this time on your desktop and mobile, and all across the reels! The Terminator 2 Slot Game is Microgaming’s first big name release of Summer 2014, and is already shaping up to be a big hit in a similar fashion to The Dark Knight slot game.

All the usual suspects from the original Terminator 2 motion picture are present, including Sarah Connor and John Connor. The two Skynet Terminators also make an impressive appearance, which of course wouldn’t be the same if they didn’t. One of which was of course played by Robert Patrick, and also featured within the game.

Loved the appearance of Arnold Schwarzenegger when he came in the 1991 launched movie Terminator? Now, you can continue your moving-reel venture, keeping your favorite movie character at the side with a new Microgaming-designed Terminator 2 video slot. This title is a remastered version of the Terminator 2 slot released in 2014, bestowing players with a stretched betting limit of 30p to £30 per spin.

Keeping the old essence alive, the 5 reels, 243 winning ways slot machine has been crafted with high-value symbols and the T-800 Vision feature that awards lucrative cash prizes. Trigger the Free Spins feature and gain the chances of spinning the reels at no cost. And, if you are lucky enough, braced up with 96.62% RTP and expandable winning ways up to 1,024, the Terminator 2 slot is very capable of rewarding you with mammoth cash prizes with its 2,952x maximum jackpot. The game offers winnings for matching symbols in adjacent positions of left to right of the reel set.

Along with a promising return to player ratio, the title also possesses a soothing hit frequency of 43.6%, along with a low volatility level. This much hit frequency would surely mean that the machine will befit you with winnings for more than half of the stakes you put on it.

Now, let’s dive a little more to take a closer look at the Terminator 2 slot machine.

To bring the Terminator 2 video slot, Microgaming collaborated with the Universal studio, through which the film was released. Hence, it’s needless to say that this slot tile is an official game of the movie Terminator 2: Judgment Day. When the best iGaming studio works in partnership with one of the movie industry flagship holders for developing a game, you can assume the excellence that this game possesses.

Terminator 2 is a visual encapsulation of the movie teamed up with superior graphical quality and a fitting adventure-action background score. The game also has some robotic animations, clips from the film, and metallic overlays that place this title very adjacent to the thrill and ambiance the movie has had. The utilization of deep blue and black color has given the gaming screen a robotic look. And, the prolifically detailed visuals, coupled up with the background score, will develop a sense of awe as soon as you open the title on your phone or personal computer.

The blue-colored energy orb with a scatter logo on it is the gaming scatter, which offers 300.00 coins when it comes 5 times in a spin. Scatter wins get multiplied by the total bet amounts. And, scatters can pay irrespective of the positions it comes in.

The T2 symbol is a gaming wild, bringing 150.00 coins, appearing 5 times on the reels. T2 symbol can replace all the gaming symbols but lack the power against scatters and free spins.

Another important symbol is the T-1000 symbol, capable of replacing all other gaming symbols.

The Terminator 2 Slot Game features Microgaming’s unique 243 ways to win method, offering a lot more chances to win and value for your coins. A very different and far more valuable variation from your more traditional 25 or 30 payline slot game.

The slot Terminator 2 comes with two different bonus features. When one can randomly trigger instantaneous cash prizes, the latter one is the classic free spins feature boosting the gameplay for additional winnings.

Always an important feature to include in slot games, and in the Terminator 2 slot game, you simply need to trigger 3, 4 or 5 scatters across the reels for the free spins bonus feature. A very nice feature in that when activated, an additional row of symbols drops onto the existing reels and turns the feature into a 1024 ways to win slot! You then just need to keep an eye out for the T-1000 symbol, as if this morphs into any character symbol, you are in for a BIG WIN.

A feature which just creeps up on you when you are least expecting it (in a good way of course), is the T-800 Feature. Within the base game, this sparky addition puts you directly inside the T-800 Terminator. Whilst inside the Terminator, you’ll scan for the reels for targeted cash prizes, further increasing your wins.

During any unsuccessful base-level spin, T-800 Vision Mode can be activated. For every character or symbol present on your reels, you will get an immediate cash prize when this mode is active. But, you can get the highest possible payout from the T-1000 symbol during an ongoing T-800 Mode.

And, the Free Spins Feature can also be triggered during this bonus round. In a spin of the T-800 Vision Mode, only one energy orb scatter symbol is required for triggering 10 free spins. Like the free spins round, those spins will be played with all the additional winning lines active.

We’re not quite finished yet though, as this feature also adds an extra way to trigger the Free Spins Bonus Feature. Whilst the T-800 Feature is enabled, you only need to display one scatter symbol on the screen. Then boom, we’re back to more Free Spins.

There is a certain extra buzz and hype around this early summer release, and even the CEO Roger Raatgever of software giant Microgaming has said: “We are incredibly excited to be developing an online Slot around the Terminator 2 movie. It carries a brand that has mass appeal and lends itself perfectly to the world of online gaming. As explosive as the film, we are in the process of creating an action-packed, jaw-dropping Slot; it’s a classic in the making!”

With the Free Spins feature active, bagging the jackpot of Terminator 2 becomes even more accessible. If you can secure three or more scatter symbols at once, the Free Spins feature will be triggered during any base-level spins. Then you will be rewarded with 10 free spins, and 243 paylines of the base-level spins will be expanded automatically to 1024 winning lines.

The feature becomes even more alluring when the spins drop T-1000 symbols since this symbol can transform all other gaming symbols, steering you to the highest possible wins. The free spins’ bets will be the same as the base-level spin that activates the Free Spins round.

Overall, the Terminator 2 Slot Game delivers an action packed punch and fully immerses you in a highly entertaining experience, filled with a world of machines. Having been based on the legendary 1991 film, it was always going to appeal in a big way to fans. Many online casino destinations offer Microgaming slot games, so you will not struggle to find somewhere to play. As the game is not a jackpot slot, you will also have the option to play for free too.

Terminator 2 slot machine firmly declares from its every aspect that it has come from a renowned iGaming developer company like Microgaming. Apart from the high paying potential, satisfying return to player percentage, 1x multiplier, extended betting range, and bonus features enabling players to spin with 1,024 winning ways, and the title has more to offer.

The game is equally playable on smaller and bigger screens. Hence, you don’t need to leave your gambling endeavour at your home when going outside. You can also make use of the demo version of it for practicing a few rounds for free so that you wager your money online more efficiently. Besides, as you will find autoplay options on your gaming screen, the gameplay will become much more convenient. Moreover, because of the presence of every needed attribute, it’s a great slot machine title if you truly love to live in the spinning reels. 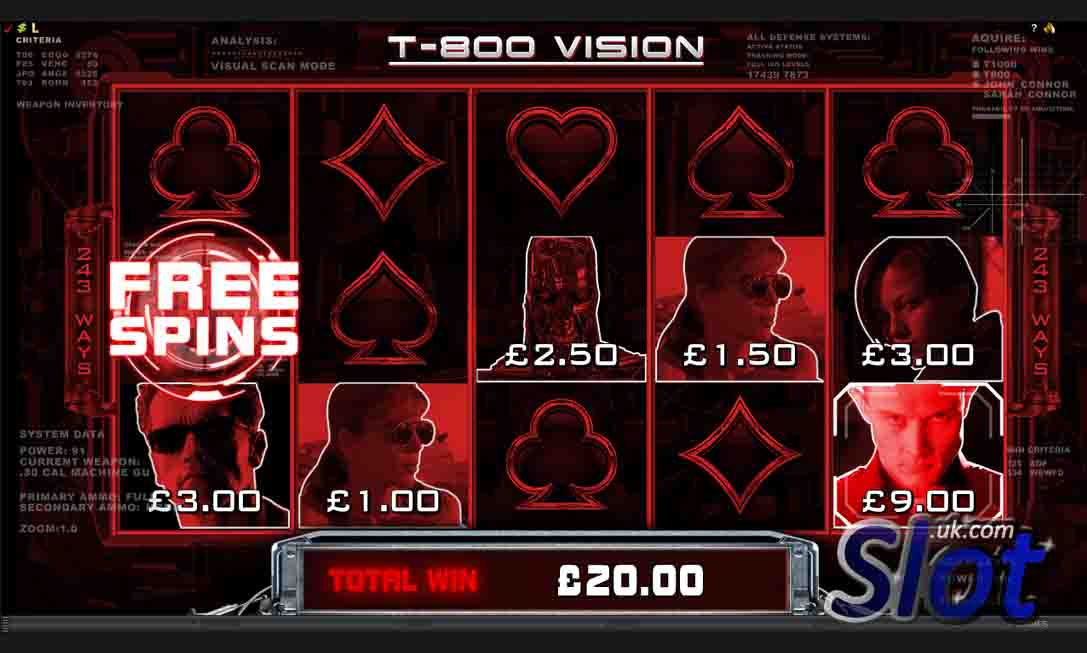 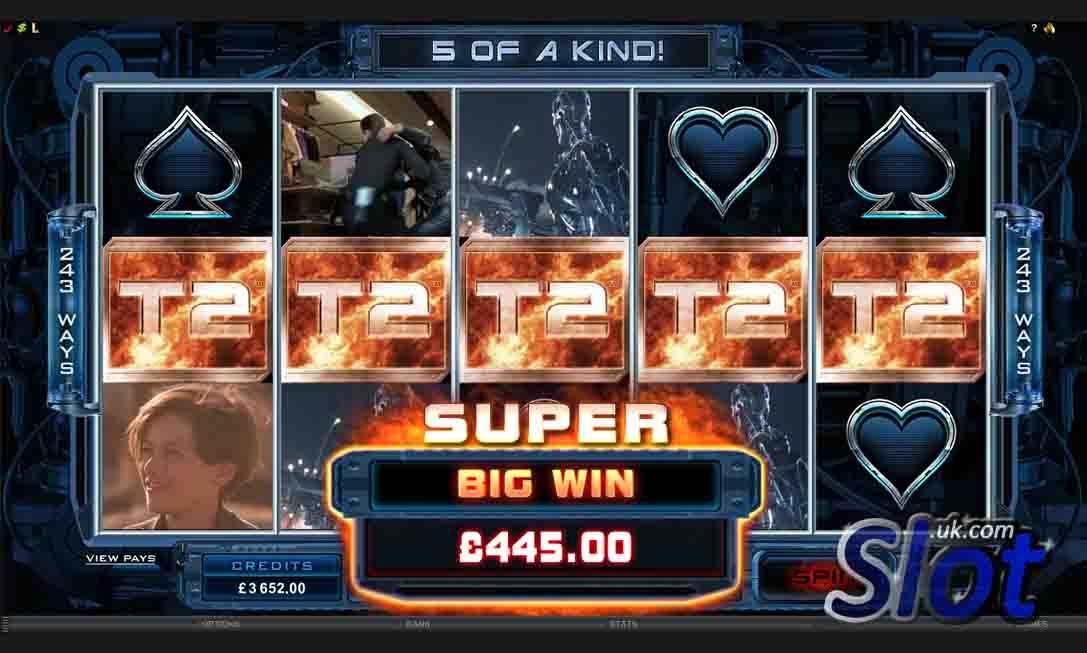