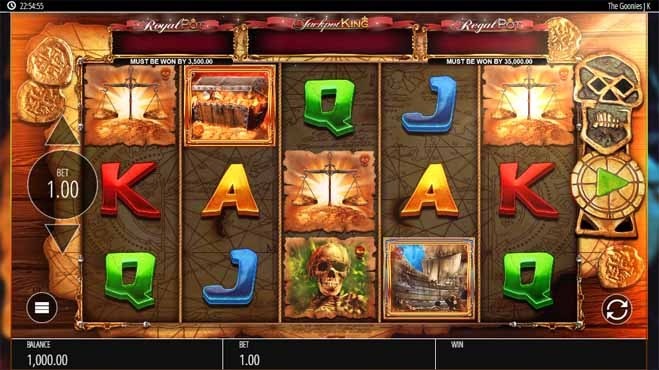 Most people growing up in the 1980s are familiar with the Goonies. Its overwhelming popularity led to the creation of Blueprint Gaming’s The Goonies, one of their many progressive jackpot titles.

Those who have seen the movie will be familiar with many of the game’s graphics. The backdrop of the game is the map that the Goonies referred to throughout the movie.

On the reels are symbols that represent the most known facts about the movie. These include pirate ships and flags, a treasure chest, skeletons of One-Eyed Willie, and gold coins with scales. The pirate flag is the game’s most valuable symbol. A medallion is the wild symbol in the game.

Unlike most other slot machines, The Goonies Jackpot has a total of 12 bonus features. One-Eyed Willie inspires many bonuses, some of which are randomly triggered.

The One Eyed Willie’s Bonus Boost adds additional bonus symbols to the reels. These bonuses allow players to experience the other six bonus features in the game.

The Truffle Shuffle Wilds feature adds overlay wilds to the reels, which turn into wilds. In the Mikey’s Hidden Riches feature five of the game’s reels may get stacked wilds or the reels themselves may become stacked.

The Data’s Colossal Symbols takes three reels next to each other on the game screen and makes them Colossal Reels, meaning one symbol is seen stretching the entire length of the reel.

The Mouth’s Lucky Coins feature uses the gold coin mystery symbol. It takes one symbol in the game and adds random symbols to all of the gold coins. Of all the random bonus features, the Sloths Win Spin bonus simply rewards players with a large cash payout.

In addition to the six randomly triggered bonuses, six more bonuses are not randomly triggered. Getting at least three of the scatter symbol on the reels at once triggers a wheel players can spin. It will reward them with one of the following features; Fratelli’s Hideout, Skeleton Organ, Super Sloth, Inferno, Goonies Go Wild Free Spins, and One Eyed Willie’s Treasures.

The Hideout Bonus asks players to choose a key which leads to another bonus or a cash prize. In Skeleton Organ, players also choose a key. The free spin features each have their own unique perks that players will enjoy.