Play the The Matrix Slot Game for free 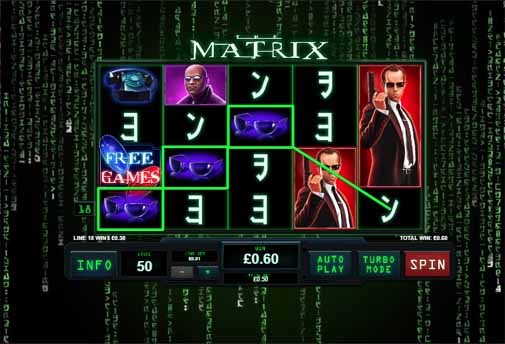 The Matrix has been around since way back in 1999, when Keanu Reeves burst onto cinema screens as the hero Neo. It’s taken nearly 20 years for the movie franchise to make its way into online casinos, but Playtech have now given The Matrix the treatment it deserved. So, soon you’ll be able to enter into the strange simulated reality, alongside some of the stars from the movies. But is The Matrix any good? Keep reading this comprehensive review to find out…

The look and feel of this slot is exactly as you’d expect, offering a futuristic playing environment, complete with binary code scrolling down the screen behind the reels. There is audio, however it’s really subtle, making this the perfect slot for those annoyed with the loud and tedious soundtracks found at some other online slots. The layout of the buttons is simple, ensuring the game is easy to play, and the speed is just about right – no so fast that you spend all your money in seconds, but fast enough for the game to remain interesting.

If you like a slot with lots of paylines, The Matrix is great. Why? Well, it has 50 paylines for you to spin in wins on, and these paylines are fixed. The fact that they’re fixed means that you have to have all 50 paylines active on every spin of the reels. You can see how the paylines are constructed by looking at the paytable. Any winning combination on a payline is automatically paid out to you, so there’s no need to learn the paylines!

But what about the bet amounts? Is this slot great for low stakes players, or is it better for high-rollers? The answer is somewhere in the middle, as the minimum bet of £0.50 will be too high for some players, while the maximum bet of £100 might not satisfy those looking to play at the very highest stakes. As with nearly all slots, the more money you bet per spin, the more money you could potentially win.

The most important thing to mention in this section is the prizes though, and when you play The Matrix, you could find yourself winning some massive sums of cash! The most you can win on any single payline is an impressive 500x your bet per payline. So, if you’re playing at the maximum stakes and manage to get five Neo symbols across a payline, you’ll win £2,000. The fact that you can receive multiple winning combinations on any spin means that the jackpot amount is considerably higher than this though. The overall RTP of this slot is 95.14% — not the highest around, but certainly not the lowest either.

So, what about the bonus features at this online slot? Well, there are three symbols to look out for during the base game, and the first is the standard wild symbol – represented by Neo in hologram form. It’s a standard wild symbol, therefore meaning it doesn’t have any multiplier or other special features attached to it. It is also the jackpot symbol at this slot, so you’ll want to see it spin into view as often as possible!

There’s also another wild symbol on the reels, however it only appears on the fifth reel. It’s represented by the black cat, and this symbol does have a special feature attached to it. If you can get this wild symbol covering the entire fifth reel, it will be duplicated on the first reel. The rest of the symbols will then shuffle around, and will hopefully land in a nice winning combination. This is called the Déjà Vu Shuffle, and is a reference to the famous part of the movie, where déjà vu is described as “a glitch in the Matrix.”

The main bonus symbol at The Matrix is the “Free Spins” symbol, which features red and blue pills. Don’t worry though – this part of the movie was really quite complicated, however the bonus features at this slot couldn’t be any easier to play! When you manage to get three or more of these symbols anywhere on the reels, you’ll be able to choose from two different free spins bonus rounds. You can find out about each of them below.

The first of the free spins rounds sees you given eight free spins, and Agent Smith will invade the reels. Every spin will see more Agent Smith symbols added to the reels, and this means you could end up with some massive winning combinations. As you’ll see, the other free spins round can offer more free spins in total, but the prizes per spin in this free spins bonus are often considerably larger.

The other bonus gives you an unlimited number of free spins, and while they’re active, any special wild symbols that appear on the reels will remain locked in place. The free spins will come to an end when you get six or more special wild symbols on the reels. This generally awards smaller prizes than the other free spins bonus, however this is made up for by the fact that this bonus tends to last much longer.

The Matrix is one of the most popular films of all time, so fans will be glad to know that the slot manages to reach the same levels of excitement and enjoyment. The bonus rounds are incredibly entertaining, however there aren’t so many that the base game is overshadowed, plus the graphics make every spin of the reels an exciting one. So, whether you’ve seen the movie or not, why not spin the reels of The Matrix today? 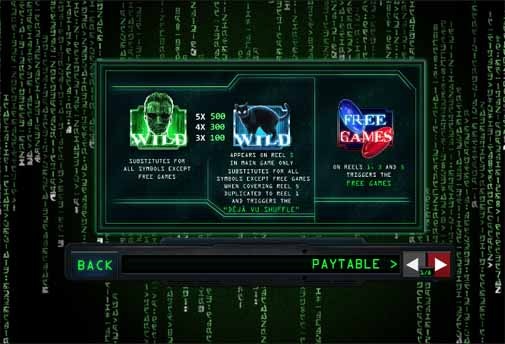 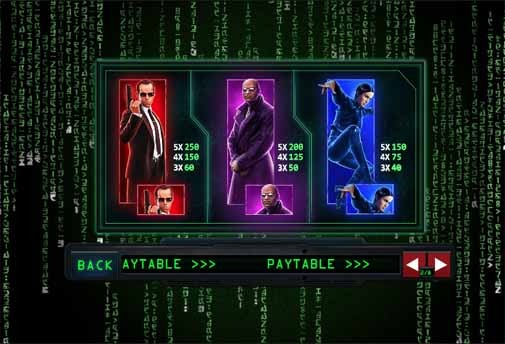