If you’re a fan of theatre – and in particularly The Phantom of the Opera – then you’re going to love NetEnt’s latest release. The Phantom’s Curse is basically a slot based on the musical written by Andrew Lloyd Webber but the title is slightly different due to Microgaming having already previously released a game with the same name. Don’t worry though, all the graphics and visuals are still recognisable from the original classic but now you have the ability to access unique features and huge prizes. So take a read of our review and find out whether this exciting slot is right down your street!

Before the game loads you will be treated to a beautifully crafted, short mini-film where you are introduced to the masked phantom. Once the reels are visible, you will notice that you r position is if you are on the stage in front of an empty opera theatre in which smoke can also be seen. Symbols include the usual hearts, diamonds, clubs and spades, but also mirrors, daggers, yellow roses, sapphire rings, Christine who is a character from the play, and of course the phantom. The music in the background as you can imagine is mysterious, frightening and captivating.

The Phantom’s Curse consists of 5 reels and 40 paylines which cannot be altered. It seems that a lot of software developers have stopped giving players the choice to change how many paylines they play with and we reckon it’s because gamers have cottoned on that reducing these will only damage their chances of winning. Instead you will be given no other alternative but 40 paylines is probably a perfect amount anyway that lets you focus on the game itself.

Available to play from 20p to £200 per spin, it’s quite obvious that The Phantom’s Curse will cater for most players. There’s no doubt that low-stake gamers won’t have to cough up much to find the minimum required, and high-rollers will be happy with the maximum offered too. Features that may make your time spent on the slot a little easier include the ability to play up to 50 spins on the bounce and the chance to go all in with your bet as long as it’s within the requirements.

But how much can you win on this lavish-looking game? Well you earn up to 800 times your original stake during the Free Game feature which we will discuss later. In terms of the base game, you may be able to guess that the Phantom is the highest paying symbols and finding 5 on a payline will give you 200 coins. Another important symbol to look out for is Christine who will pay 100 coins for 5 on a payline.

Now we’re going to discuss the bonus features, and like any good slot, this is your best chance of winning big money. The game features bonus symbols and they can occur on reels 1 and 5 in the shape of the mask, stacked mask, phantom, stacked phantom and stacked Christine. The masked phantom will act as the wild and you may already know from previous games that this will act as a substitute for all symbols except for the scatter – which is the chandelier.

Whenever the stacked phantom and stacked Christine symbols lands on reel 1, you will trigger the Pick and Click feature. At first, this will give you the chance to choose from 8 roses with cash prizes on offer. However, you will then be given 3 mirrors to select which can give you a multiplier up to 3x and this will be applied to your winnings from the first section. Be excited because the most you can win on this feature is 36 times your original stake.

Last but not least, we have the Free Spins feature and this occurs when the scatter symbol appears on reels 1, 3 and 5. You will then see a chandelier that hangs over the reels and a rope is connected to each one. If you find a phantom symbol on a reel, then that rope is cut, and the feature ends when all of them are disconnected. However, the phantom will turn into wilds for the free spins and there’s a chance they can turn sticky which will rocket your potential jackpot to 800 times your stake.

You can’t have a Phantom of the Opera slot without a stunning soundtrack and thankfully NetEnt manage to deliver on that front. However, they don’t seem to stop there and there’s plenty of entertaining features that manage to offer incredible prizes. We found it hard to remember too many slots that offer the chance to win 800 times your stake on one spin. It’s definitely engaging and well worth a try, especially if you’re a fan of Andrew Lloyd Webber’s work. 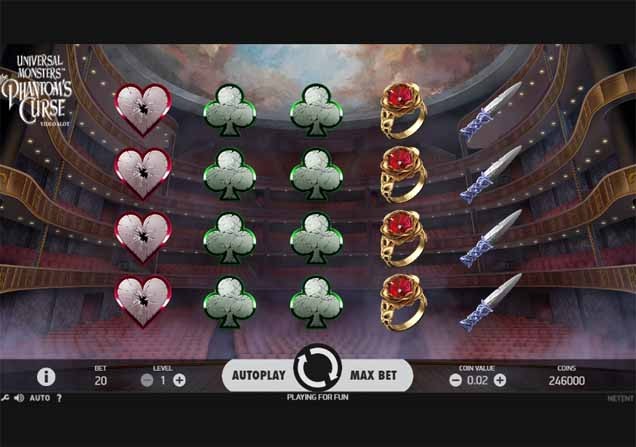 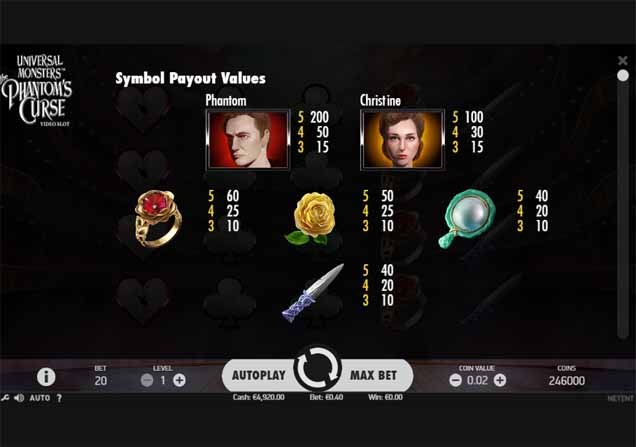