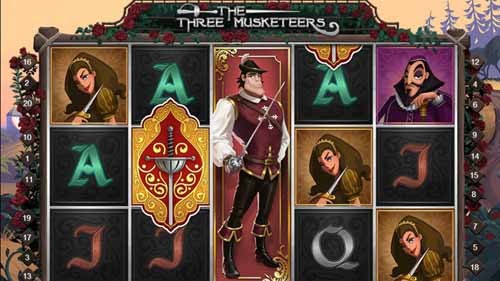 Alexandre Dumas has inspired several movies with his adventure novel The Three Musketeers, and has now apparently inspired QuickSpin too it seems. Based on the legend of Atos, Porthos, and Aramis, the slot was released in 2013.

When you first launch the game, the music will instantly take you to the pre-French revolution time. It is classical and yet upbeat and adds a really exciting element to every spin of the reels. The game background is an illustration of a countryside road, and on each side of the reel, you’ll also see climbing roses.

The Three Musketeers has 20 paylines, spread over five reels. The minimum bet for this game is £0.25 per spin, and the maximum bet is £100. The bet size may seem a bit odd at first, however the spin value is based on the total bet multiplied by the numbers of lines and also includes a little extra for the feature bet. The feature bet in The Three Musketeers is always enabled and consists of a wild multiplier reel.

The game symbols include The Three Musketeers, which pays the most, an evil bearded man on a blue background, a lady and a bearded cardinal on a purple background, which pays the least of the unique symbols. The standard J, Q, K and A are also present on the reels. The Wild symbol is the Jester and when it fills a reel it will split into 2 revealing a multiplier symbol – if you hit two of them your winnings will be multiplied by 4x.

The bonus feature takes place in the streets of Paris and consists of 10 free spins with a possible multiplier up to 4x. The free spins feature is triggered when three swords land on the reels. During the free spins mode, the Wild symbols will nudge up and down giving you the best winning combination. In true Musketeer style, all musketeers will substitute for each other, making it much easier for you to bag yourself some serious winnings.

Just like in the base game, the Wild multiplier is also present. In fact, it is more likely to appear due to the nudging reels. This means that when one part of the Wild shows the reel will move to reveal an expanding wild.

The Three Musketeers from QuickSpin is by far one of the best Musketeer slots available on the market at the moment. Several game providers have designed slots inspired by Dumas’ novel, but QuickSpin sure did it more successfully than the others. The wins are frequent, like in most QuickSpin games, and should please adventure lovers. 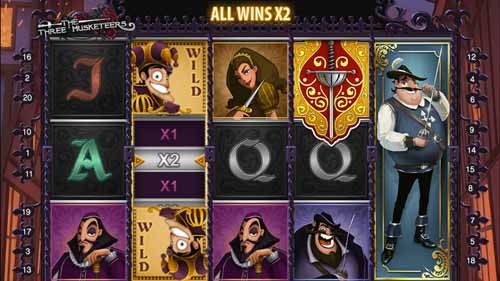 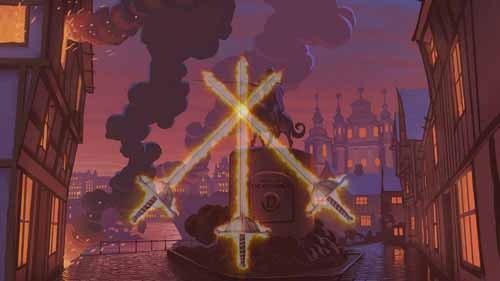