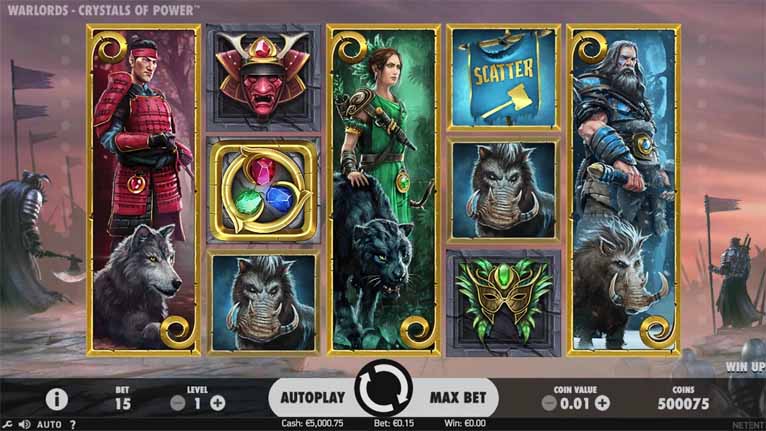 The movie quality introduction to the video slot machine game Warlords Crystals of Power will impress even the most skeptical players. Once the game is launched players are immersed in a fantasy world that features realistic looking 3D graphics.

The premise of the game is that players are working with the warlords to find and collect the crystals of power. Along the way, the power of the player greatly increases, leaving the lucky ones with huge winnings to walk away with. The game centers on three rulers; the Samurai, Barbarian and Priestess. Each of them represents one of the game’s scatter symbols and each has both their own pet and their own crystals.

There are also three colored banners that each match one of the rulers and these banners are scatter symbols as well. When players get three of the banners on the reels at once they win three free spins as long as all three banners are the same color. If players get one of each colored banner on the reels at once a battle breaks out among all three warlords. When this happens players will see a fire encrusted rock thrown onto the reels, which will turn any regular symbols into scatter symbols instead. Free spins are often the result of this action.

Play now at these Online Casinos