Wild Rails is far from the typical video slot machine game. It is different than what players are used to. Rather than the symbols falling from above, they come in from the side. The symbols travel across the screen and the reels are shaped like train tracks.

Beyond the reels players see a blue sky and brown cliffs. A train tunnel flanks both sides of the reels. This is the background scene players see. On the reels, the symbols include some of the train’s passengers, as well as a golden train carriage, which acts as the game’s wild symbol. The train symbol holds the carriage, helping it stand out from the others. Players may even get as many as five of them on the reels at once.

While playing those free spins one or more of the wild train symbol appears each time. The good news is that even the scatter symbol is considered a wild for the duration of this bonus feature. Every time players accumulate three scatter symbols another wild train appears on the reels. For every wild that appears one more free spin is awarded.

Sometimes players may even get a full screen of golden train wilds. When this happens, every group of three train wilds awards the corresponding number of free spins. Players are never limited by the game in the amount of free spins that they can win. 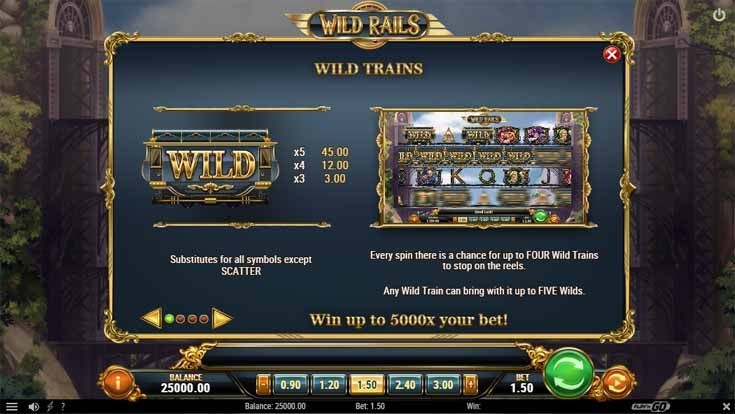 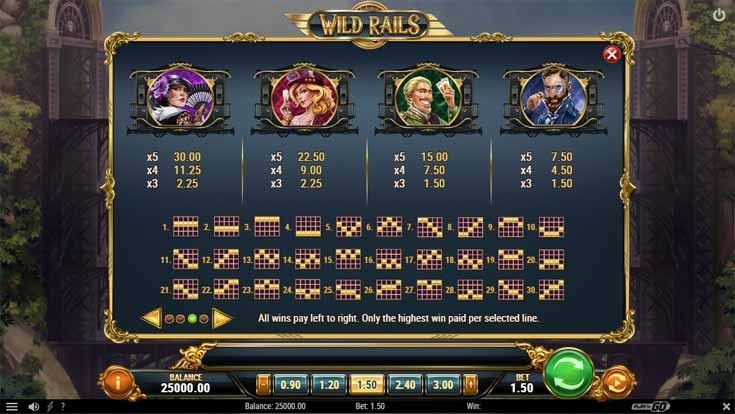 For players who have grown bored with typical slot machine games, Wild Rails offers them a different experience. The unique layout of this game means it can entertain even the pickiest of players.

The visual appeal of the game is not to be underestimated. Its detailed graphics make it feel more like a movie than a game. Players with high expectations will likely prefer this to less visually appealing games.

The chance to win big bucks is something Wild Rails offers players. Its free spin round can be very lucrative for the luckiest of them. With no cap on the number of free spins players can win, the game has a lot to offer. It stands out from most others with its unique approach to entertaining players. This game is one that will more than likely stand the test of time.