Wild Tome of the Woods

Greek mythology is a commonly used theme in the online slot machine industry. Some slots are also based on novels. In the case of Wild Tome of the Woods, its theme is a combination of novels and Greek mythology. However, none of it was inspired by anything true. Instead, the game’s manufacturer, Quickspin, created its own fairy tale.

The game is based on the story of Tom,a reclusive wizard who thinks of nothing but making the objects around him turn into gold. With enemies attempting to steal the gold, Tom joins forces with three animal friends to put a stop to the stealing.

The game is set in Whittlewood Forest and this is the only part of it that is true. Located in England, the forest was used as a hunting ground during the medieval period. Behind the reels players see the dense forest.

On the reels themselves are elixir bottles in green, red, and yellow. Tom’s animal friends, Eleanor, Crikey, and Sylvester, are also symbols on the reels. Each animal appears as a stacked symbol. The wild symbol in the game is a golden wreath.

A red book serves as a special symbol, the wild tome found in the game’s name. Getting at least one red book on the reels triggers the Wild Tome bonus. A symbol on the reels is then randomly removed and replaced with a wild. This leaves multiple wilds on the reels and leads to cash winnings for players. Randomly, a wild symbol on the reels could become a Wild Tome. When this happens more wilds are automatically added.

Players that get an entire screen of wilds will get the All Wilds Win bonus. It takes every wild symbol on the reels and doubles their values, meaning players win 1000 times the amount of the money they bet on the spin that triggered the bonus.

Wild Tome of the Woods Screenshots 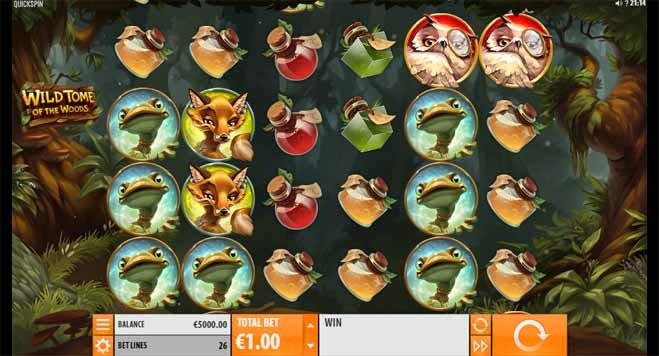 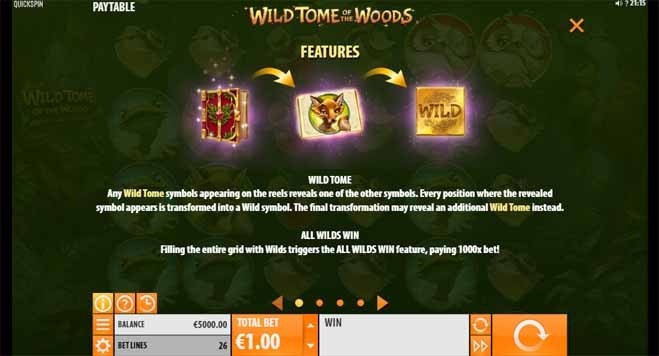 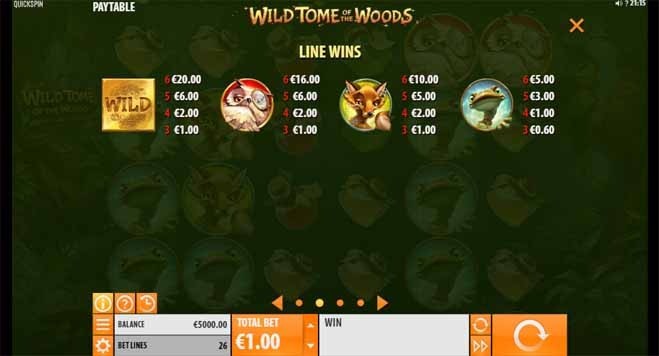 For those who enjoy fairy tales, Wild Tome of the Woods is a fascinating game. Its generous bonus features keep players interested and spinning the reels in the hopes of getting a screen full of wilds.

Though the graphics are plain, the excitement of the game more than makes up for it for most players. Its high payout percentages make it worth the risk for players who use their own money on the game.