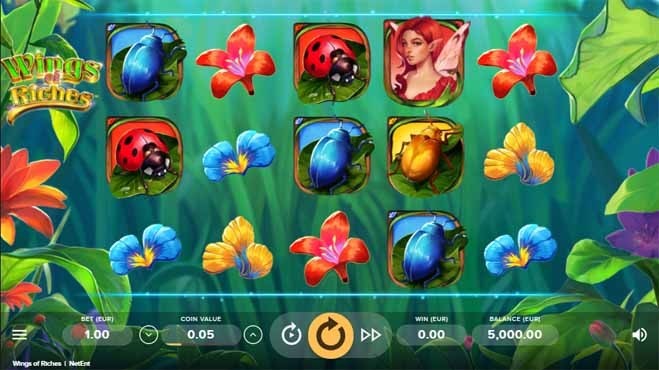 For anyone that enjoys nature, the Wings of Riches online video slot is a breath of fresh air. Its whimsical style makes it a soothing way for players to relax and unwind.

The first thing players will notice about this slot is its vibrant colors. The background shows an up close view of the greenest grass and colorful leaves. Its reels blend into the background and feature oversized colorful symbols.

Players will see the reels filled with ladybugs, fairies, and a beetle, and flowers in assorted colors. As the most important symbols in the game, the fairies are seen in pink, purple, gold, and green. The scatter symbol is represented by a purple dragonfly.

Dandelion flowers are used as the wild symbol in the game. The dandelions are only ever seen on the three reels in the middle of the game screen. Whenever they land on the reels they expand upwards to cover an additional two spaces. Landing on the reels also causes them to transform some of the symbols around them into wilds.

When players get at least three of the purple dragonfly scatter symbol on the reels it triggers free spins. Those 10 free spins are played on bonus reels as opposed to the standard reels. The bonus reels include a multiplier symbol. Found only on the fifth reel it appears to be a ladder made up of flower bulbs. The ladder leads down to the bottom of the reels.

For every instance of a multiplier symbol landing on the reels its value increased by one, with the highest value being a five times multiplier. In addition, free spins may be re-triggered when additional scatters land on the reel during the bonus. Two more scatters will get players and extra five spins for free while three more scatters will get players an extra 10 free spins.

Though hard core slot players may want something more exciting, Wings of Riches is popular among casual players who just want to watch the reels spin and see what happens.

Fairies can often cheer players up and this is one of the reasons they are so often used in slots. The colorful creatures remind some players of childhood stories such as Peter Pan. For this reason and more, Wings of Riches is a game that can offer players a way to enjoy a happy fantasy world.