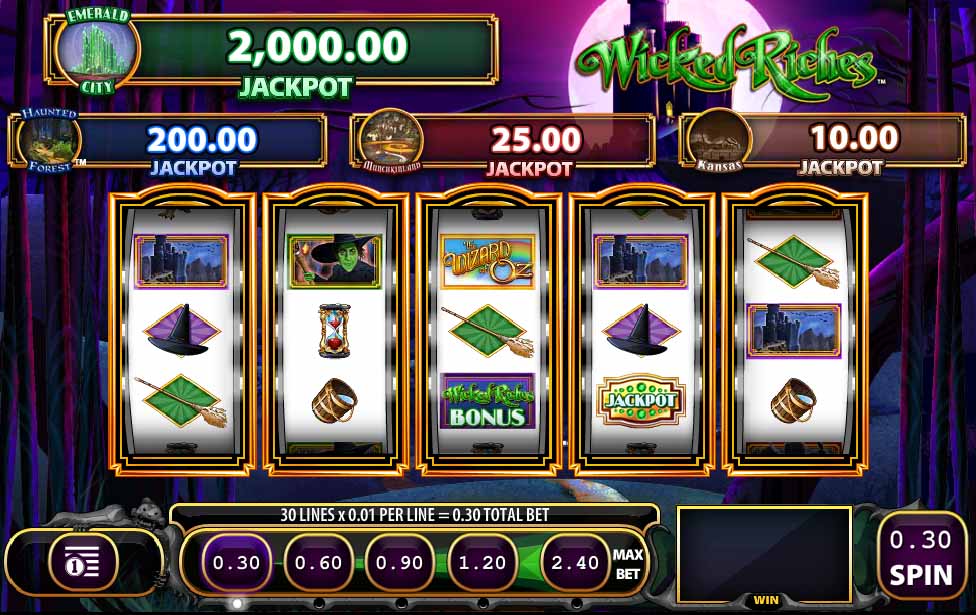 There are several slot machine games based on the Wizard of Oz, yet most of them are based on Dorothy’s journey through the Yellow Brick Road. Wizard of Oz Wicked Riches instead focuses on the Wicked Witch of the West, Dorothy’s arch nemesis in the movie.

This game is darker than the other slot machine games based on Wizard of Oz. The background screen is a hauntingly black and purple forest. The full moon in the sky casts an eerie light on the reels. The symbols used are all related to the Wicked Witch, including a flying owl, black witch hat, an hourglass with red sand, a bucket filled with water and a tattered broom.

While the reels are spinning the signature tune of the Wicked Witch plays in the background. The triggering of select bonuses in the game leads to an old fashioned clock chiming. The game’s bonus symbol, Wicked Riches, triggers free spins when players get at least three of the symbol on the reels. Players are then rewarded with eight spins for free and comes with a multiplier, the value of which is randomly selected. The lowest multiplier doubles a player’s winnings and the highest multiplier gives them a prize of 10 times their bet.

Players are always on the lookout for the game’s flying monkey symbol. Anytime it shows up on the third reel monkeys fly onto the game screen and turn various symbols on the reels into wild symbols. This is referred to as the Flying Monkey Bonus and is considered a shifting wild feature, something few slot machine games have. The bonus can be triggered at any time, including during free spins.

There is also a Tornado Bonus players should watch out for. This is a feature that is randomly triggered during the game. Suddenly players will see a tornado moving around on the game screen. It is responsible for choosing which of the four jackpots a player will win. The chosen jackpot is then revealed and players are taken to a different screen where they are required to choose one of the barns shown. The prize a player wins is then revealed to them. The higher the bet was that triggered the Tornado Bonus the more a player will win.