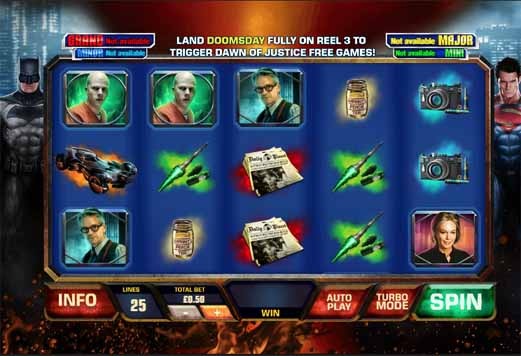 Based on the 2016 film, Batman v Superman: Dawn of Justice is a brand-new slot from software developers Playtech. The two DC Comics superheroes do battle once again in the follow up to 2013 movie Man of Steel, and even though it’s a rivalry you would perhaps never expect, the tension manages to bring unbeatable entertainment to the reels. Four progressive jackpots will no doubt be your main focus of attention but there are also plenty of free spins and stacked wilds that should increase your payroll. So take a read of our extensive review and get ready to see these iconic legends fight to the death!

If you’re a fan of Superman already then you’ll notice the setting of Metropolis that forms the backdrop to the reels. As you may expect from a slot made from a high-profile film company (Warner), the graphics are superb, and both superheroes perch either side of the game looking menacingly on. Symbols are all recognisable from the movie and include a camera, the Daily Planet, a sword, a shield, peach tea, the Batmobile, and kryptonite. There are also well-known characters that feature such as Alfred the Butler (Jeremy Irons), Martha Kent (Diane Lane), and villain Lex Luthor (Jesse Eisenberg).

Batman v Superman: Dawn of Justice features 5 reels and 25 paylines that cannot be altered. If you’re a regular follower of the Playtech slots then you’ll be aware that they tend not to give players the opportunity to adjust the paylines as it will only contribute to damaging your chances of winning. Also, rather than having a game with over 200 ways of winning, it allows players to focus purely on game itself without getting distracted.

Brace yourself for this next bit of information because players can bet from as little as 25p or as much as £2,500 per spin! Yes, you heard correctly and this will no doubt please the high-rollers out there that are reading this. However, low-stake gamers will also be happy as they shouldn’t have to dig deep to find the minimum required. To make things a little easier for some of you, Playtech have also included an Auto Play which will allow up to 99 spins continuously, and a Turbo Mode feature.

But what can you win on this battle of the superheroes? Well, being as the slot features a progressive jackpot, the prizes can be humongous but we will discuss that later on. In terms of lucrative symbols, you need to be looking out for the Batman v Superman: Dawn of Justice logo as 5 of these on a payline will pay out 50 times your original stake. The game comes with 4 different Wilds – Batman, Superman, Wonder Woman and Doomsday – and they all pay 50 times your original stake too.

We’re now going to discuss the bonus features and – as always – these will remain your best chances of winning the biggest prizes. During the base game you will be able to access the Shifting Wilds feature and this occurs when either the Superman or Batman symbols appear. They will both shift one position for your next spin (the Batman will move to the right and the Superman will move to the left) and they will carry on shifting until they drop of the reels.

When both the Superman and Batman symbols clash on the same reels, they will activate the Batman v Superman Free Games feature, and extra wilds are added during this time. You will proceed to be asked who you think is going to win between the two superheroes, and when both of them appear on the same reels, they will battle it out. The losing hero will slip off the reels with wilds left in its place and if you choose the winner, you will be granted 4 free spins.

Another bonus you need to look out for is the Dawn of Justice Free games feature which is triggered when the Doomsday wild symbol lands on reel 3. The wild will then become a shifting stacked wild and will move 1 position to the left after every free spin. When it reaches the first reel, it will turn into a double-stacked wild and it will take over both reels 1 and 2. The feature will then end but if you manage to find a superman, batman or wonder woman wild which lands left to the doomsday wild then it will send it back to the previous reel. This enables for more spins to be won and a whole lot of cash prizes. 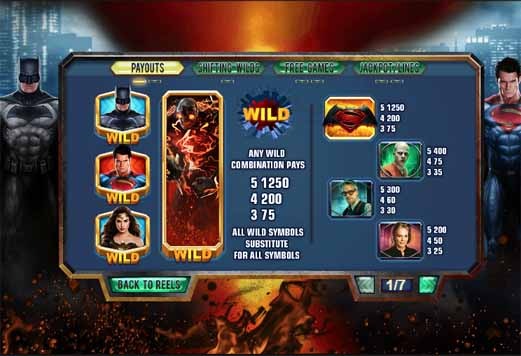 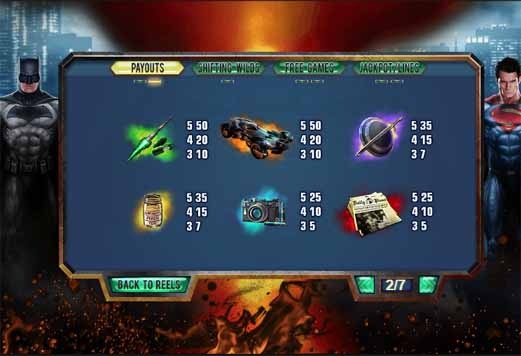