Charms of the Sea

Charms of the Sea is a new slot from the people over at Playtech, and this is something that is always going to get us quite excited! After all, Playtech have been responsible for some of the best online slots of all time, so could this new slot join the upper echelons? Well, it might not be the best slot ever made, however it’s still a good addition to Playtech’s portfolio, offering loads of fun and some big prizes. Why not learn more about this slot by reading through the Charms of the Sea online slot machine review below?

This is a slot with five reels and three rows, and you’ll find a total of 20 paylines spread over the reels. These paylines are fixed, so you’ll have to play each and every one of them on every spin, however this shouldn’t be a problem. After all, who would ever want to reduce the number of paylines at a slot machine anyway?

While you can’t alter the number of paylines that are active, you can change the amount of money you bet per spin. This is done by using the plus and minus buttons underneath the Line Bet section. The minimum you can bet is £0.01 per payline, which translates into a total bet of £0.20, while the maximum bet per payline is £25, meaning that the maximum overall bet is a rather impressive £500. As with all slots, the more money you bet, the more money you could stand to win.

The prizes at this online slot are pretty impressive, as you might expect from a game from Playtech. The top prize comes when you manage to get five wild symbols across a payline, and when this happens you’ll win a prize worth 10,000x your bet per payline. This means that those playing at the highest stakes could win a prize worth a staggering £250,000. That’s not a bad win at all, considering this isn’t even a progressive jackpot slot! The creatures are the other high paying symbols at this slot, while the clams are the lower paying symbols.

There are quite a few bonus features at this online slot, however the first to mention is the wild. This is pretty easy to spot on the reels and it can substitute for most other symbols, giving you the chance to make some nice winning combinations. What’s more, it’s the jackpot symbol, so you’ll want to see it spin into view as often as possible.

There are no free spins at this slot, which is unusual, however you will find three other bonuses, each of which can be randomly activated at any time. The first is the Stacked Wilds feature, and this sees stacked wilds being placed onto one of the reels. You’ll then get a free respin, before another set of stacked wilds are placed on the reels, and the pattern then repeats again. In the end, you’ll have nine wilds stacked on the reels, which can lead to big prizes!

Next up is the Wild Chunk feature. A wheel can appear on the reels at any point and will then spin, to choose a number. You will then get the same number of wilds placed onto the reels. After this you will get a free spin, with all the wilds held in place.

Finally, there’s the Sticky Wilds feature, which can also start at any time. This sees three sticky wilds being placed onto the reels, before you get a free respin. The process is then repeated twice more, meaning that you’ll have a total of nine wilds on the reels for the final respin. This is different to the Stacked Wilds feature, as the symbols aren’t stacked – instead, they’re placed on the reels in a more random way.

Charms of the Sea is yet another fantastic online slot machine from the people over at Playtech, and it offers everything from multiple bonus features, through to some absolutely massive prizes. So, if you’re looking for a new online slot to play at your favourite online casino site, we would certainly recommend spinning the reels of Charms of the Sea. 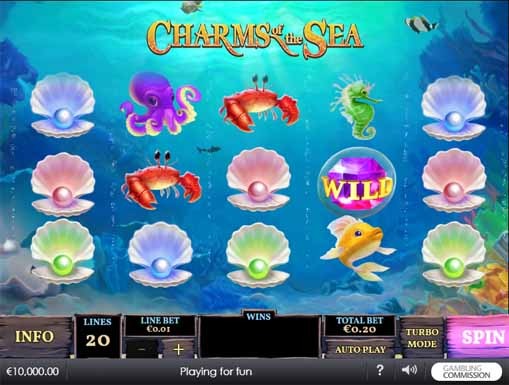 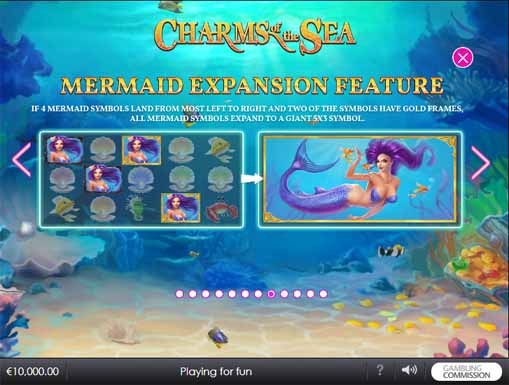