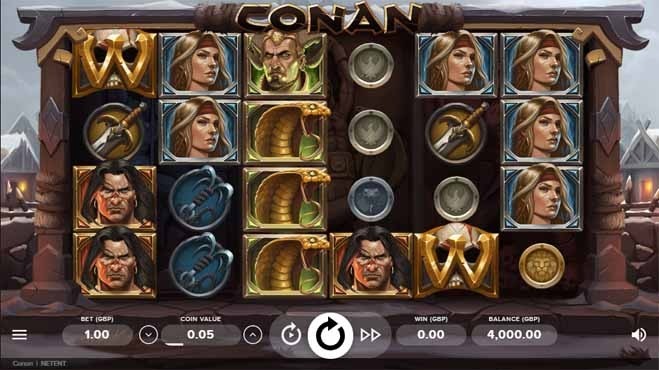 The Conan online video slot machine was created based on the classic cult favourite character. Its old fashioned style pays homage to the legacy of Conan. The game is set in the times of Conan the Barbarian’s Hyborian Age.

The background scene behind the reels features a snowy village on a night pierced by thunder. Within an ancient temple lies the reels. On them, players will see several statues made of stone. Each of them is a variation of Conan and serve as the game’s most important and valuable symbols. Medium value symbols seen on the reels include helmets, grappling hooks, and swords. The lowest paying symbols on the reels include snakes, falcons, and lions.

There are also three premium symbols on the reels. They consist of Conan along with Thoth-Amon his arch nemesis, and Valeria, his sidekick. A blue tower serves as one of the wild symbols in the game.

There are a few bonus features built into Conan that make it worth playing. The blue tower wild symbol may appear on the first and second reels. When it does, it turns into an expanding wild that will cover either part of or the entire reel with the tower. On the third and fourth reels players may see the mystery symbols. When they land on the reels they will change into another randomly chosen symbol in the game. With matching symbols on the reels, players win cash prizes. The symbol may become stacked and if it does the mystery multiplier feature is triggered.

In this feature, Conan enters into a fight with a giant snake. Each time he hits the snake, there is a multiplier that increases in value. By the end of the feature, players will have at least a triple multiplier, which awards them a cash prize three times the amount of their bet. However, they may have as much as a five times multiplier.

Another bonus involves the battle wilds appearing on the fifth and sixth reels. When it does it becomes an expanding wild. It may take up as many as three full positions on the reels. 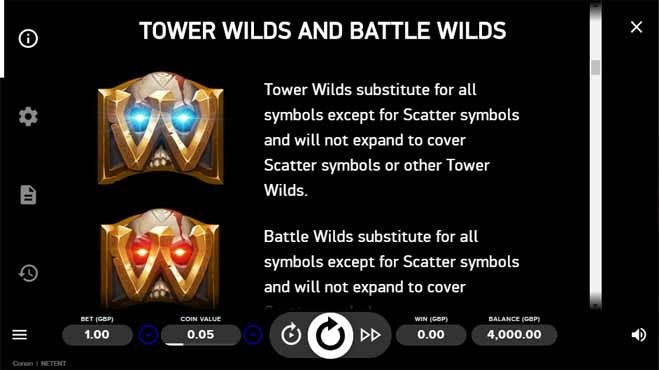 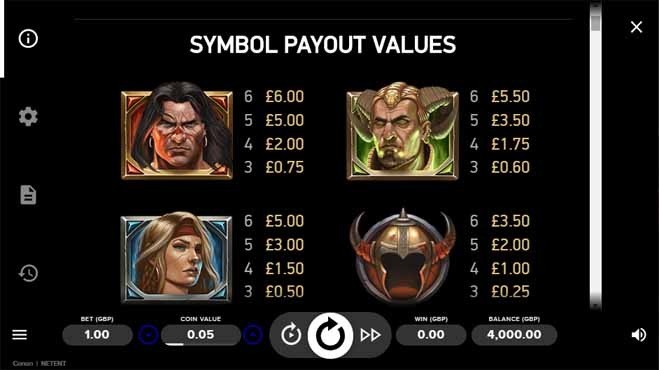 Aside from these bonuses, players can also enjoy free spins. Anywhere from three to six scatter symbols on the reels at once trigger them. With three scatters players get 10 free spins; six gets them 50 free spins. Players have a choice among three bonuses; City of Thieves, Temple of the Free Spins, and Walls of Tarantia. The free spin bonuses include include standard and expanding wilds, as well as mystery symbols, making them lucrative for the luckiest of players.