Divine Fortune is among NetEnt’s more popular jackpot games. Its ancient Greece theme is a timeless one that many popular slot machine games use. It has all of the high quality graphics, sound effects and bonus features NetEnt is so well known for. The game’s sound effects provide Greek themed music in the background as well as give a voice to each of the game’s important symbols. Bonus features also include their own sound effects. The reels on the screen are surrounded by sculpted artistic pieces that represent ancient Greece.

The Basics of the Game

As a five reel, 20 fixed lines and 3-row video slot machine game Divine Fortune gives players many opportunities to become richer. Its three jackpots include the much coveted progressive Mega Jackpot, and are awarded when a player wins the Jackpot Bonus game. Other features of the game designed to help players win big are the wild-on-wild feature, falling wilds, free spins and re-spins.

In the wild-on-wild feature overlay wilds land on the reels where standard wilds are already seen. The overlay wilds then become expanding wilds, covering the length of one reel. In the falling wilds re-spins feature, a wild symbol lands on the reels and proceeds to move down the game screen every time a player gets a winning spin. Players also get a free re-spin every time this happens. Re-spins will continue to accumulate until the wild symbol leaves the game screen.

The most popular feature of the game is the Jackpot Bonus Feature. This feature is triggered when players get three of the golden coin bonus symbols on the reels after a single spin. Players will notice a jar set to the side of the reels where the three coins go when they show up on the game screen. Then they will see a screen full of new reels in front of them. During this feature the three coins representing the jackpots appear on the new reels in random places. One row of symbols award players the minor jackpot, while two rows of symbols award the major jackpot and three award them the Mega Jackpot.

While the minor and major jackpots are not progressive, the Mega Jackpot is. This means that every time anyone bets real money on the game the amount of the Mega Jackpot goes up. The luckiest players may find themselves winning more than one jackpot while this bonus feature is taking place. The game’s jackpot never goes lower than €10,000. In total, the jackpot bonus game gives players 15 reels worth of potential wins.

All of the symbols used in the game are related to ancient Greece. This includes a Nemean lion, a Minotaur, phoenix and Medusa, who is the game’s highest paying symbol. The other high value symbol in the game is Pegasus, the wild symbol players will want to keep an eye out for, especially during the wild-on-wild feature.

As a high variance online video slot machine game, Divine Fortune is popular in many virtual casinos. In fact, 58% of all online casinos include this game in their selection of video slot machines. The RTP for this game is 96.5% making it worth spending real money on in the minds of many players. This means that every time players place real money bets 3.7% of their bet goes towards the progressive jackpot, helping the value grow constantly.

Divine Fortune is a diverse game because it is suitable for everyone from casual players to high rollers. Casual players can place a bet for as little as €0,20while high rollers can place a bet of as much as €100,00. In total, players have 10 bet levels to choose from. When it comes to winning pay lines; players can win any of the game’s 20 pay lines. Players should note that unlike many other slot machine games this one has no multipliers and free spins can never be re-triggered. However, like most modern slot machine games there is an auto play feature that can be activated in order for a certain number of spins to be automated.

This video slot machine game is so popular among online gamblers that it also has a mobile friendly version, called Divine Fortune Touch. Android and Apple based mobile devices are compatible with the game and players will find that the experience is just as good on their mobile device as it is at any online casino. The sound effects and animations in the mobile version of the game are also just as good.

For a new and visually appealing video slot machine game, Divine Fortune is a great choice. Though it hasn’t been out for long it is already gaining fans that want to try their luck at the game’s jackpots. This game is also enjoyable for anyone who takes an interest in ancient Greece and the creatures that represent it. Similar slot games include Legends of Troy. 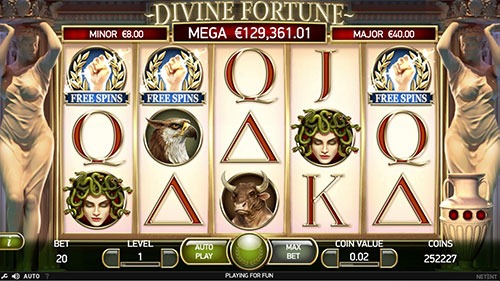 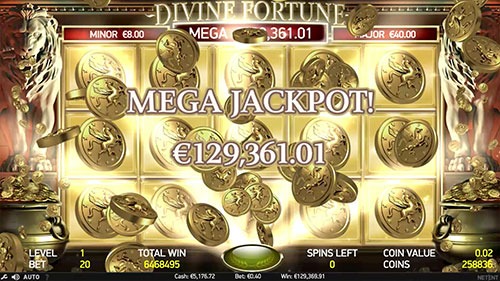