If you’ve played either of the other two Fairytale Legends titles – Red Riding Hood and Hansel & Gretel – you should know that these NetEnt online slots are absolutely fantastic. You should also be really exciting about the fact that the third instalment of the series has now been released, and this one focuses on one of the most popular fairytales of all time: Snow White. On this page, we’re going to let you know everything you need to know about this fantastic online slot machine, so why not keep on reading this comprehensive Fairytale Legends: Mirror Mirror online slot review today?

Fairytale Legends: Mirror Mirror looks like the majority of other online slots, as it has five reels, each of which is three symbols high. Across these reels you’ll find 243 different ways to win. This means that there aren’t any paylines, and instead you’ll win a prize if you manage to get three identical symbols on consecutive reels, starting from the first reel. The fact that there are so many different ways to win makes this slot an incredibly exciting one.

The minimum bet amount at this online slot machine is just 10p, therefore meaning that those looking to play for low stakes will certainly find what they’re looking for here. The maximum bet amount is £100, which isn’t as high as the maximum bets found at some other online slot machines. To increase or decrease the amount you bet, just click the arrows either side of the “Level” and “Coin Value” fields. It should go without saying that the more money you bet per spin, the more money you can potentially win.

But how much money can you win when you play this online slot machine? Well, the most that can be won on a single spin of the reels is a massive 1,822.50x your bet per payline, which is rather impressive. The highest paying symbol on the reels is the Fairytale Legends logo, however both Snot White and the Queen are also high paying symbols. As is often the case, the lowest paying symbols are the 9-A ones.

We usually start with the wild symbol in this section of the review, however there’s something unusual about Fairytale Legends: Mirror Mirror – there is no wild symbol at this game. This is something very rarely seen at online slot machines, and we think it’s great, as it differentiates this online slot from the many others out there.

There are still plenty of bonus features though, including the Magic Mirror Respins, which start when you manage to get the Magic Mirror on the third reel. When this happens, you’ll see that either Snow White or the Queen is chosen, and you’ll then get respins. Every time the chosen symbol lands on the reels it will become sticky, and you’ll keep getting respins until no other selected symbols spin into view. You’ll then find out how much you’ve won, and it could be quite a lot!

You’ll also find that there are four random bonus features at this slot, and the first of these is called the Fairy Magic Spin feature. This can happen before any spin and sees a block of up to seven medium value symbols appearing on the reels. Next up is the Fairy Surprise feature, and this can activate after any non-winning spin. When it does, a fairy will pick one of the medium value symbols, and all symbols with a lower value on the reels will turn into the chosen symbol.

The next random feature is called the Fairy Mirror feature, and this sees the Magic Mirror being added to the central reel – something that starts the aforementioned Magic Mirror Respins feature. Finally, you could see the Fairy Scatter feature, and this can activate when you have two scatters on the reels. If it does, you’ll find the third scatter being added to the reels, which will start the Mirror Mirror bonus feature, which you can learn about below…

The main bonus feature is the Mirror Mirror bonus feature, and this starts when you manage to get three golden boxes on reels one, three and five. When you do, you’ll be asked to pick one and you could win free spins, a cash prize or the Mining Bonus. If it’s free spins, you’ll get ten in total, and they are just standard free spins, while the cash prize is pretty self-explanatory. If you pick the Mining Bonus, you’ll be asked to keep breaking crystals – something that will lead to a cash prize. 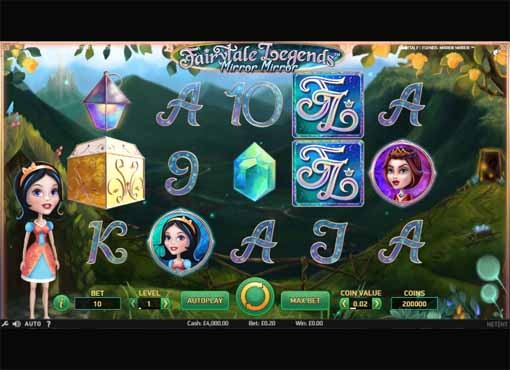 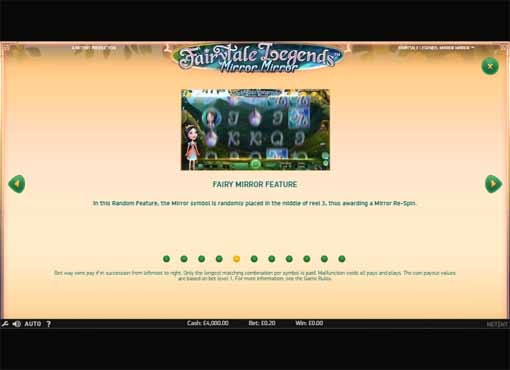