There are some online slots out there that are, quite frankly, a little too over-the-top for the tastes of some players. These slots have fancy graphics, complex bonuses and many other added extras, and some players simply find this too much. Instead, they want a simpler slot – a slot that harks back to the golden age of fruit machines, but that still provides decent wins and a few simple features. If you’re a player looking for a simpler online slot, Hot Sync from Quickspin could be a fantastic choice, for a number of different reasons…

As soon as you see the reels at this slot, you’ll realise that Quickspin haven’t tried to be too inventive. Instead, they’ve relied on the symbols that have made fruit machines popular throughout the years – symbols such as cherries, bells and sevens. So, you won’t need to get accustomed to seeing strange symbols spinning around on the reels at this slot – instead, you can feel at home with this game from the very first spin.

Of all the symbols on the reels though, the most valuable is the wild symbol, as this will pay out a prize worth 50x your bet when you land five of them on an active payline. This might not seem like a huge amount, however you have to remember that it’s possible to get multiple wins on a single spin, so the top prize per spin is actually much more. You’ll be able to find out how much you can win per spin by looking at the paytable, which also has details about the bonuses (although you can also find out about these later in this Hot Sync review).

Hot Sync is a slot with 20 paylines, which is far fewer than many other slots out there. This is actually a good thing though, as it helps to add to the simplicity of the game. After all, hundreds of paylines can sometimes just make each spin a really confusing one! It’s not possible to alter the number of paylines, however you can change the amount you bet, with the lowest bet per spin being £0.20, and the highest possible bet being £100. If you are betting the maximum amount, the most that can be won per payline is £5000.

It should also be mentioned that Hot Sync is a medium variance slot, meaning that you should have a good balance between smaller wins and larger ones. Of course, you could get lucky and spin in the jackpot on your very first spin of the reels though!

There aren’t loads of bonuses at Hot Sync, however there are enough to keep most players entertained. Like most online slots, aside from classic slots, there is a standard wild symbol at Hot Sync, and it is pretty easy to spot. It doesn’t have anything fancy attached to it, such as multipliers, however it will help you to create some really nice winning combinations. Remember that the wild symbol is also the jackpot symbol, so it is always a welcome sight on the reels!

The main feature at this slot is the free spins though, and these are activated when you manage to get three Bonus symbols spread across the second, third and fourth reels. When this happens, you’ll receive eight free spins. While the free spins are active, any Hot Sync Wild symbol that lands on the reels will cause that reel to remain “hot” for the rest of the free spins. Hot reels have extra wild symbols on them, meaning that they bring additional chances for you to win some large sums of money, plus they are always identical when they land.

There can be no doubting the fact that, when compared to most other online slots, Hot Sync is a pretty simple one. This is a good thing though, as there are already loads of more complicated slots out there, and Hot Sync is a chance for those looking for a simpler slot to enjoy playing slots online. Despite being simple, the prizes can still be pretty impressive though, plus the overall gameplay is incredibly enjoyable. 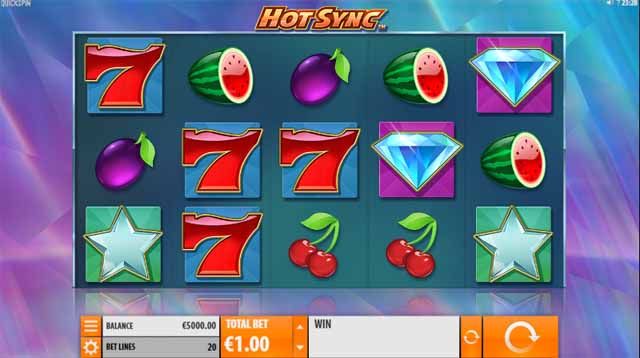 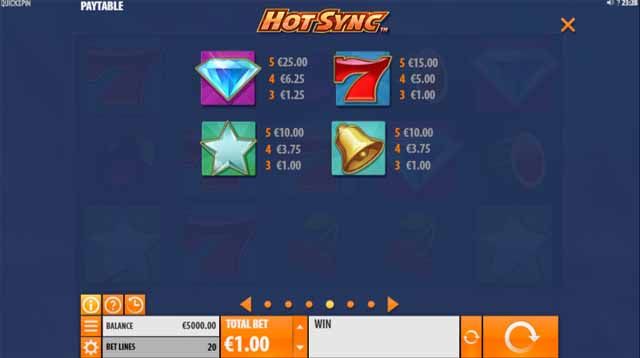