Mars Attacks is a film that really divides opinion – you either love it, or you hate it. The new Mars Attacks slot from Blueprint Gaming shouldn’t be as divisive though, as we’re confident that the majority of people spinning the reels will absolutely love what they find. From great bonuses through to big prizes, this slot really does offer pretty much every. Why not learn more about this slot by reading through our comprehensive Mars Attacks slot review below?

The Mars Attack slot looks pretty much like most other slot machines, as it’s a game with five reels and three rows. Across these reels you’ll find 20 paylines, and these paylines are fixed. This means that you can’t alter the number of paylines in play. We are more than aware that 20 paylines isn’t that many, but we can guarantee that the excitement of this game isn’t affected. In fact, we’d go as far as saying that this is one of the most exciting slots we’ve played in a long while.

But how much can you bet per spin? Well, low stakes players should be happy with the minimum bet of £0.10, while high stakes players will really like being able to bet a massive £500 on every turn. The more money you bet, the higher the potential prizes will be. To alter the amount of money you bet, just use the up and down arrows to the left of the screen. It’s nice to see that it’s easy to change the bet amount, as it can be a little complex and confusing at some online slot machines.

Perhaps the most important thing to look at in this whole review is how much money you can win. The most that can be won is an impressive 500x the stake, meaning that those playing at the highest stakes could win a massive £250,000. The highest paying symbol on the reels is the wild, so you’ll want to see it spin into view as often as possible. The RTP of this online slot is 96.44%, which is about average for an online slot machine.

In this section, we’re going to look at the bonus features on offer, and the first of these to mention is the wild symbol. This is pretty easy to see on the reels and it can substitute for most other symbols, therefore meaning that it can be incredibly useful. There’s no multiplier attached to the wild, unlike at some other slot machines, however this is still a symbol you’ll want to see as often as possible, especially considering the fact that the wild symbol is also the jackpot symbol!

Next up, there are five random bonus features and these can activate at any point. The first bonus is called Sub-Zero Lazer and this causes winning symbols to remain in place before a respin is initiated. This will keep happening until no new wins appear on the reels. Next up is the Mega Shrink Ray, which shrinks the reels, causing there to be five symbols per reel. This means that the number of ways to win increases to a massive 3,125. Then there’s the Expansion Cannon, which adds mystery symbols to the reels. These mystery symbols then all turn into the same symbol.

The next random feature to mention is called Radiation Blaster and this is a simple feature, as it simply adds wild symbols to the reels. Finally, there’s the Abduction Beam feature, which sees the symbols on the reels being removed, before they’re replaced by a new set of symbols.

There are then five bonus rounds that can be activated by getting three or more Bonus symbols anywhere on the reels. You’ll need to pick a section of the map and you’ll then get randomly awarded one of five different features.

The first of these features is the Spy Hunter feature, which is a simple picking bonus. Then there’s the We Come in Peace bonus, which is also a picking feature, albeit a better one that the Spy Hunter feature. Next up there’s the D.N.A. Analysis feature, which gives you five free spins on a set of five reels with four symbols on each reel. During these free spins, you will have expanding wilds, which grow higher by one symbol on every spin.

Next up there’s the Martian Takeover feature, which sees you getting 10 free spins on a standard set of reels. While these free spins are active, you’ll have roaming wilds active. Finally, there’s the Final Stand feature. This sees you unlimited free spins on a standard set of reels. During these spins, you’ll notice that there are two bars, one representing humans and the other representing aliens. There is also a special symbol on reels two and four – getting this symbol on the second reel causes the human bar to fill partially, while getting the special symbol on the fourth reel causes the alien bar to partially fill. The humans will multiply wins, while the aliens remove symbols. If the humans win, you’ll receive a special bonus at the end of the feature.

Mars Attacks is a fantastic online slot, offering you the chance to activate loads of different bonus features. Perhaps more importantly though, you’ll have the chance to win a huge sum of money! There’s not much to complain about at all when it comes to this online slot, so why not try it out today at one of the online casinos we’ve recommended.

If you enjoy this slot game, another classic movie based slot you may like to try also is The Goonies slot. 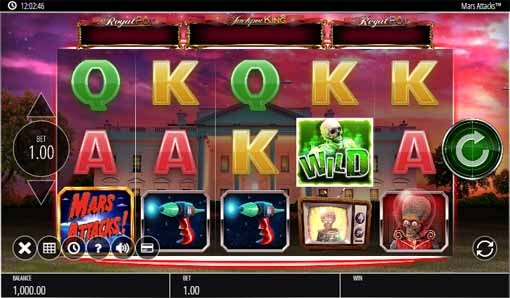 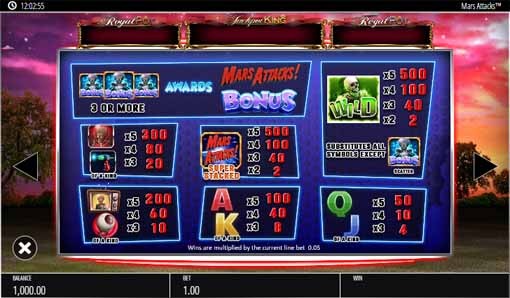