If you’ve ever played a classic slot at a casino or other venue, you’ll immediately be able to play Mega Money Multiplier. The first thing you’ll notice is the fantastic look of the game though – it’s minimalist in design, with elegant features and a simple layout. The look of a slot is actually a really important aspect of its overall enjoyability, and Mega Money Multiplier really excels in this area. The sound is also good, as the hustle and bustle of a casino can be heard in the background, making you think you’re in a real land-based casino when you play.

There are three reels at this slot, just as it should be when it comes to a classic slot, and each of these reels contain three symbols. The symbols are all ones that you’ll recognise from fruit machines, and include BARs and Sevens, as well as combinations of the two. You’ll also notice that the middle column of symbols is surrounded by a golden outline – this is because this central column is really important, as you’ll see later on in this Mega Money Multiplier review.

Spread across the three reels you’ll find nine different paylines, and these are fixed. This means that you have to play all nine paylines at the same time. Even if you were able to alter the number of paylines though, why would you choose to play less than nine anyway? After all, playing more paylines will lead to a better chance of spinning in a winning combination! The paylines are pretty easy to work out, and it’s essentially the case that you need to get three of the same symbols on three consecutive reels to win a prize. The symbol that’s a cross between a BAR and a Seven can be used to complete combinations of either symbol, which is often useful.

The stakes at this slot vary massively, with the lowest possible bet being £0.15, and the maximum bet being £150. This means that everyone, from low stakes through to high stakes players will find a betting level that suits them. It isn’t immediately obvious how to adjust your bet amount though. To do so, you’ll need to click on the bet amount, which will then allow you to adjust the sliders and alter the amount you bet. It’s not the simplest way to adjust your bet amount, but you’ll probably only need to do it once, so doesn’t present too much of a problem.

The last thing to mention in this section is perhaps the most important though, and it’s the prizes. After all, they’re the main reason people play online slots, aren’t they? Well, the most that can be won in a single spin at this slot is a massive £100,000, which is a pretty decent amount for a classic slot. This happens when a 5x multiplier appears on the middle reel, and is flanked by two 2x multipliers. You’ll find out more about the multipliers in the next section though, as they are an integral part of this game, and a really exciting innovation by the people over at Microgaming.

The phrases “bonus features” and “classic slot” don’t generally go together, as the majority of classic slots don’t feature any significant bonuses, aside from the occasional wild symbol. This isn’t the case at Mega Money Multiplier though, as it has a really exciting respin feature, as well as some significant multipliers.

You’ll notice when the reels spin that there are multipliers on them. The middle reel contains the majority of the multipliers, and the 5x multiplier is the highest of them all. The first and third reels only contain 2x multipliers. These also act as wild symbols. Any combination featuring one of these multipliers will have its value multiplied by the stated amount, and if two multipliers feature in one combination, the win is multiplied by both of them.

The real fun starts when you get two multipliers on the second reel though. When this happens, the central reel will stay in place, and the other two will respin, giving you a second chance to win. This free respin also has a 2x multiplier attached to it, so you could find yourself winning a massive amount of cash! It is also sometimes the case that the central reel will nudge up or down during the game, just so you can get two multiplier symbols on the reel.

There aren’t any other bonus features at this slot, but when you have the fantastic respin feature offered at Mega Money Multiplier, you really don’t need to have any other features.

Mega Money Multiplier is a classic slot, but with a twist. All fans of classic slots should feel comfortable playing this game, however fans of video slots might also enjoy it, thanks to the great bonus feature it offers. The fact that you could win up to £100,000 when you spin the reels only adds to the attraction of this fantastic classic slot from Microgaming. 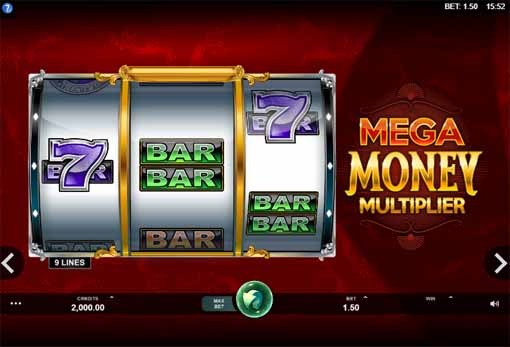 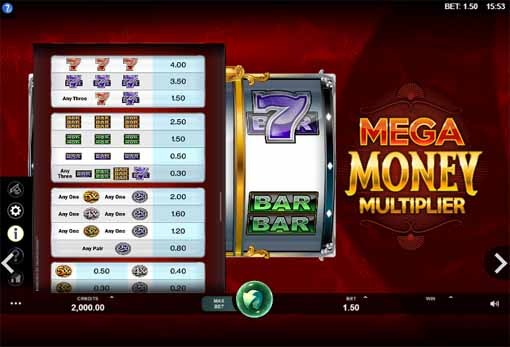