If you’re a fan of original, futuristic sci-fi slots then you’re going to love this game from NextGen. Bounty Hunt takes you on into the world of law enforcer Kat Lee as you join her in a quest to bring fugitives to justice in order to win huge cash prizes. In a mix between Blade Runner and Robocop this slot may not be entirely unique in the industry but there’s still plenty of fun to be had as you’ll encounter plenty of free spins and bonus options. Feel free to grab your gun, take a read of our detailed slot review and decide whether it’s perfect for you!

Upon loading Bounty Hunt for the first time you’ll notice a futuristic city forms the backdrop to the reels and flying cars that shoot regularly from one side to the other. Graphically it looks superb and symbols that make up the game include the female bounty hunter, three criminals in the name of Big Boss, Dr Fury and Hank Blade, a gun and a grenade. There’s a great little storyline that you can also get entwined in as you prepare to catch the criminals who have been causing chaos in the city. A dark, mysterious soundtrack will play in the background and it can become a bit tedious after a while but that’s what the mute button is made for.

Bounty Hunt is a game that consists of 5 reels and 25 paylines which can be altered. However, we would advise to keep them at their maximum in order to have the best possible chances of winning prizes. If your bet size is too much then simply lower the coin amount. We’ve found that 25 paylines are the perfect amount if you’re aiming on maximum enjoyment without getting confused with the amount of different prizes on offer.

Players will be able to bet as little as 0.25p or as much as £250 per spin which means that it will cater for 99% of the gaming population. There’s no doubt that the minimum is perfect for low-stake gamers but the maximum is also great for the high-rollers in the industry. You can even choose to take advantage of the AutoPlay option which gives you chance to sit back and relax while the reels spin away. The maximum amount you can set is 100 spins.

But how much money can you actually win on Bounty Hunt? Well, as you can imagine, Kat Lee is the most lucrative symbol on the game and 5 of these across a payline will reward you with an impressive 250 coins. However, the three criminals can also win you some serious dollar with Big Boss earning you 200 coins for 5 on a payline, Dr Fury earning you 175 coins, and Hank Blade getting you a respectable 150 coins. Other high paying symbols include the grenade with a maximum prize of 120 coins and the gun which will win you 100 coins.

But how can you win the biggest prizes on Bounty Hunt? Well, as with most slots, the bonus features are your best chances of doing so and there’s a couple on the game that need to be discussed. A unique little feature arrives in the form of the crosshair target that glides across the game as you spin the reels. If it stops on a playing card then it will turn that symbol in a Wild meaning more money for you. However, if it lands on the gun then that symbol along with another one will become Wild too. If the crosshair lands on the grenade then the whole reel will become Wild and if it lands on any criminal then all the other criminals will become Wild too. The fun doesn’t end there though because if it lands on Kat Lee, it will add a Wild onto all of the reels and turn the brave bounty hunter Wild too.

The Free Spins feature is always the one which bags players the most money and this can be triggered when the crosshair lands on any wanted poster symbol. This will entitle you to 10 free spins and you’ll also be shown a wanted poster featuring all three criminals. If the crosshair falls on one of these, then he will be jailed and the symbol will turn Wild for the rest of the feature. The same applies to the other two baddies, and if all three are captured then you’ll end up with 4 different Wild symbols on the reels, giving you incredible payouts!

Fans of the sci-fi genre will no doubt enjoy this futuristic thriller that NextGen have created. The features available are thoroughly entertaining and the crosshair innovation is a unique touch. As with most games though, the free games feature is the most attractive aspect about it as you may be able to access the free spins with an incredible 4 Wilds if you’re lucky! Overall, Bounty Hunt is an incredible slot that manages to deliver on so many fronts and is well worth a try even if you hate sci-fi! Hats off to NextGen for creating another gem! 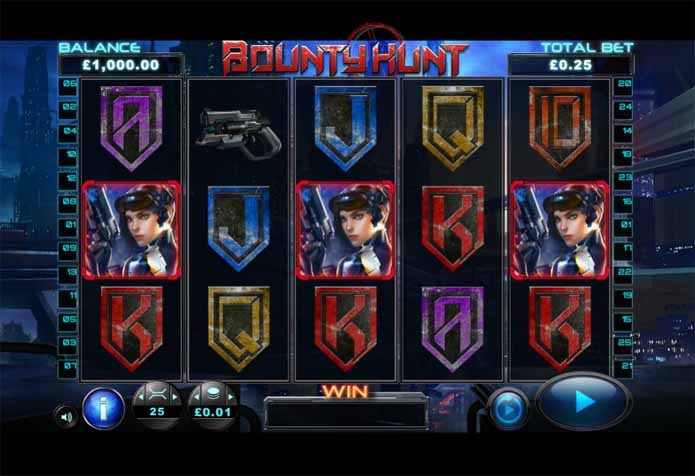 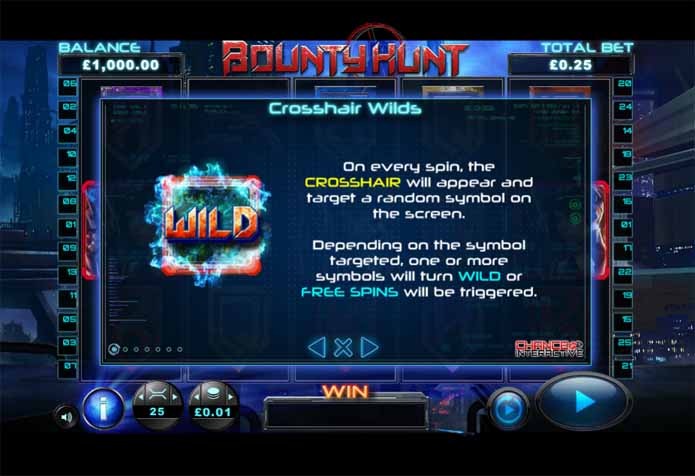