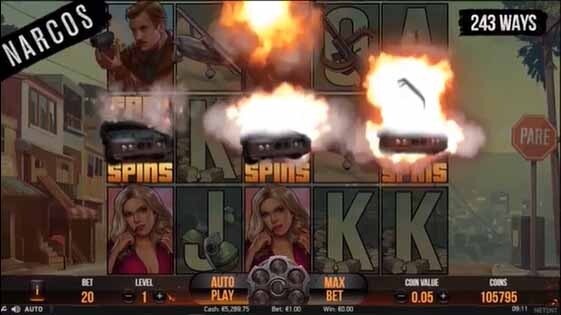 Narcos is an extremely popular Netflix show. As a result, NetEnt released a video slot machine game based on it. The action in the game mirrors what fans of the show have already seen in its previous seasons.

The game’s background is of the streets of Medelin, which is the Columbian capital. It follows the story of Pablo Escobar, a cocaine kingpin well known for running the gang scene in Columbia.

Players that are familiar with Grand Theft Auto will notice that the Narcos slot is animated in the same style. There are a few different background scenes used in the game, all of which mimic the style of Grand Theft Auto.

Regular gameplay is set high in the hills of Medelin. Below lies the city, filled with a sidewalk, shops and an area for residents. The middle of the screen features the city’s main road. However, the reels overshadow it.

Certain bonus features temporarily change where the game’s action takes place. One of them shows the prison where Pablo Escobar resides. Another is the exterior of a nightclub, where a shooting is taking place.

Even the typical card suit symbols are customized to fit the theme. Each suit includes something extra, such as cash, a gun and a grenade. Other symbols used in the game are Cessna jets and flamingos.

The game’s most valuable symbols are all characters from the show. The characters used are Connie Murphy (a fictional character on the show,) Steve Murphy (also a character and husband of Connie,) Javier Pena, and Jose Rodriguez Gacha (a drug baron that partly inspired Narcos.) While Pablo Escobar serves as a bonus symbol, a DEA Badge is the wild symbol and a car is the scatter symbol.

There are four bonus features included in this game. They are Narcos Free Spins, Walking Wilds, Drive-By and Locked Up. When the scatter symbol lands on the first, third and fifth reels, players get 10 spins for free. While free spins are being played, a Drive-By can happen on any spin. It is randomly triggered during the game. In a Drive-By a car shows up with gangsters armed with guns. As the car drives past the reels a goon starts shooting at them. If a bullet hits one of the highest value symbols they instantly become wild symbols.

When wild symbols help make up a winning combination, Walking Wilds are triggered. This is a wild symbol that moves over a single space with every spin of the reels. As soon as all the winning wild symbols disappear from the screen, normal gameplay resumes.

Getting three of the Pablo Escobar symbols on the reels within the same row triggers the Locked Up bonus. This takes place in his prison cell. All players see is golden briefcases and the bonus game’s symbol. They then spin the reels to create clusters of symbols. When a cluster meets a golden brief case, players receive a prize as a reward.