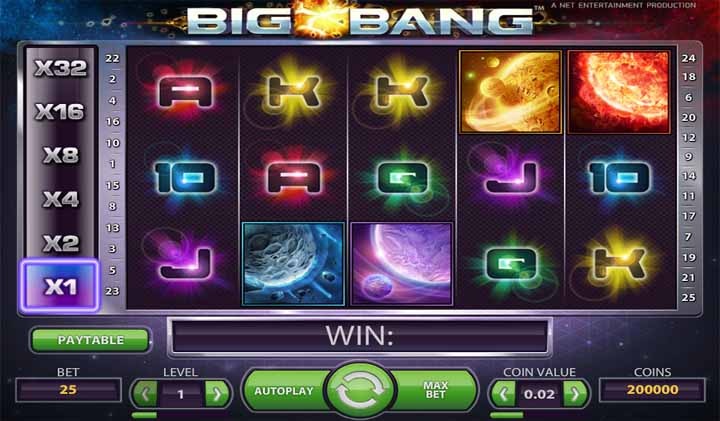 Gear up space explorer and get ready for a sensational intergalactic trip, as well as some serious prizes, when you play Big Bang from NetEnt. The game was released in 2014 and is still very popular with casino players from around the world.

The graphics of the game are quite colourful but yet not off-putting, and they all follow the same colour palette and have a similar glow to them. The game is quite easy to the eye and beautiful to observe. Big Bang’s game symbols mainly consist in 3D planets and the common symbols of 10, J, Q, K, A. Most of the animations in this game happens outside of the reels in the multiplier ladder. The pay lines are clearly identified too on the left and right, which makes this game an ideal game for casino newbies.

Because of its similarity to Starburst, one could think that NetEnt possibly hoped to replicate the immense success of its predecessor when creating Big Bang. It’s more like that they decided to provide an alternative to it by delivering yet another level of excitement though, and they have succeeded in this.

The base game has five reels and 25 paylines. The max win on this game is 268,032 coins, which is clearly far higher than many other online slots currently available. Is this explosive enough for you? As always, the wild symbols substitute for all symbols and these wild symbols can provide some incredibly good prizes.

When launching Big Bang for the first time you’ll automatically be drawn to the left side of your screen, and there you’ll see a list of stacked multipliers from 1x to 32x. Like Starburst, Big Bang does not have a free spin feature however what this game lacks in bonus rounds is certainly made up for in multipliers. On your first winning spin, you will see yourself climbing the multiplier ladder. Once you are on the multiplier ladder, every winning spin you win will take you one step closer to the 32x multiplier. Believe it or not, it does happen quite often in the game that you reach the max multiplier level. If you manage to reach the highest multiplier, you will retain it for as long as you keep spinning in wins. 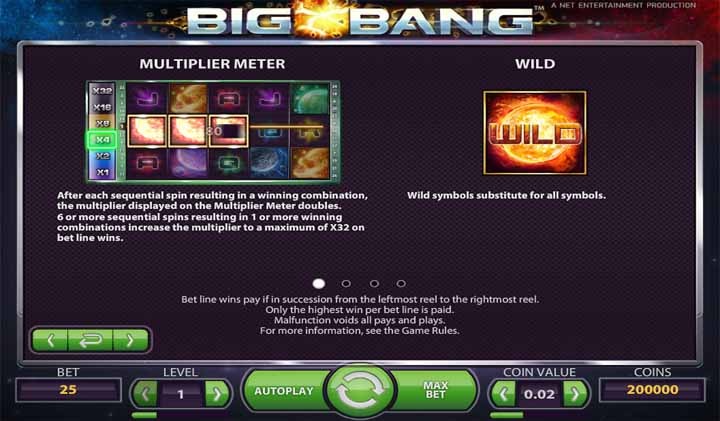 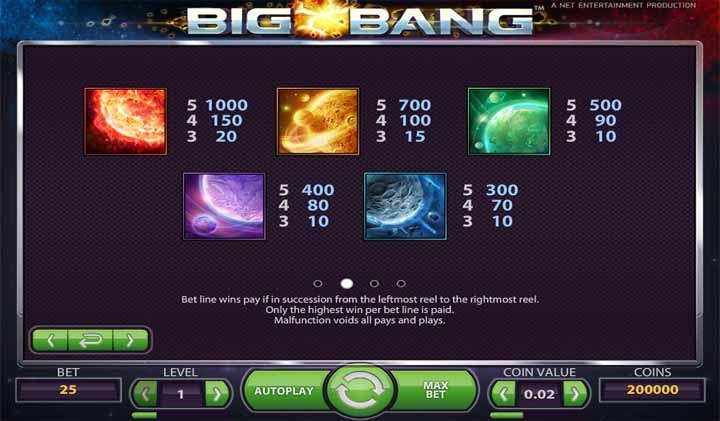 Sure the sounds track is a bit déjà-vu and the space theme has been explored quite a bit by game providers, but because of the great multiplier ladder, it’s still definitely a game that is worth playing. Plus, it’s just one of those games that often figure in winners’ stories on forums.