Few players that celebrate Christmas are going to argue about a slot machine that uses the holiday as its theme. For that reason, Festive Indulgence is spreading holiday cheer to players all over the world.

The reels are set in front of a snow covered brick house. A red awning is seen above the reels with lantern lights on each side. Players will notice that the reels are placed in the frosted window.

Only during the free spins bonus, the wreath wild symbol may become an expanding wild, which is limited to the fifth reel on the game screen. In addition, any money players win during free spins is automatically tripled at the end of the bonus feature. 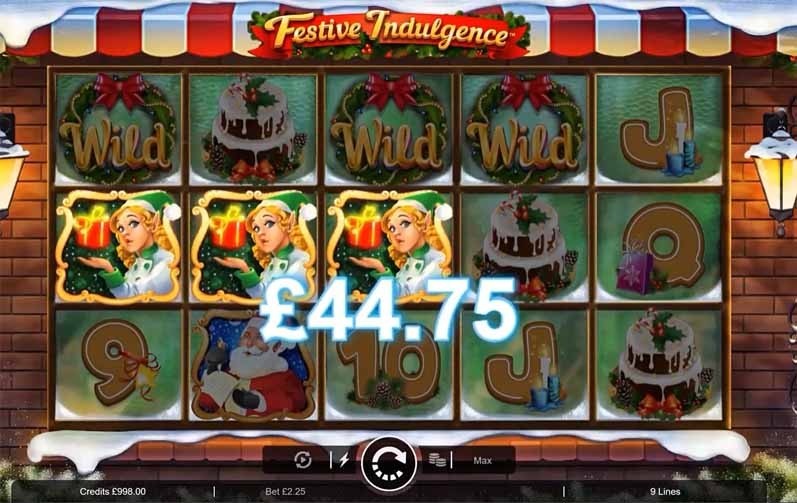 Though Festive Indulgence celebrates the Christmas holiday it is far from the only slot machine game to do so. There are many other Christmas themed slots, including A Christmas Slot, A Visit From St. Nick, Brutal Santa, Christmas Charm, Deck the Halls, Fat Santa, and many more.

While some of these games are only played during the Christmas season others are enjoyed all year long. Each game has its own slightly different take on the holiday. Whether players are looking for a cheery game or one that puts the humor in the holiday, they have many choices at their disposal.

Holiday themed slot machines are something that can help players keep up their spirits all year long. They can celebrate Christmas at any time with one of these games. Despite the fact that Christmas slots tend to pay out less than other slots, players still find them appealing. Most players are willing to spend some of their money on holiday cheer.

Only time will tell how many more Christmas themed slot machine games are released. For online players, they offer a wide variety of games that will all appeal to the masses. These games are designed to put a smile on players’ faces.